Using the offset method with a 360-degree panoramic photo 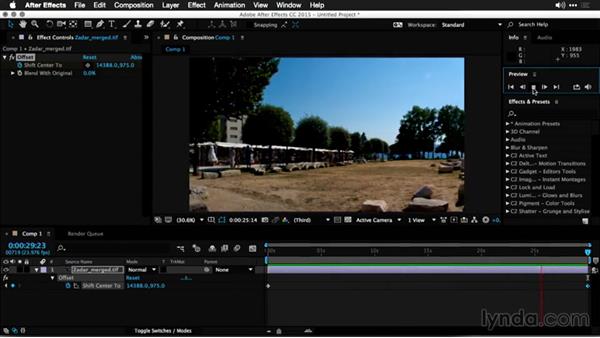 - Let's move into After Effects and start to use some of these 360 degree panoramics to make some motion graphics. To start, we'll do something easy. We're going to revisit that offset command, and use a 360 pano to make a looping background. To begin, I've launched After Effects, and I'll simply import a 360 degree pano into the project. This one is from the city of Zadar in Croatia, and it's a pretty large file of an environment. What I'm going to do is make a new composition so I'll click the New Comp icon, and choose a Preset.

In this case, I'll stick with HDTV 1080, but Im going to deliver at 23.98, and click OK. Let's resize the window here and simply drop that file into the Composition panel. We'll put that down there in the Comp, and what I have here is that file inside my composition. Now, it's ultimately up to you how long this is, but you could adjust the Composition Settings, and set a Duration for your needs.

Keep in mind that if the Duration's too short, the composition may feel like it's moving a bit too quickly. I'll click OK, and what we're going to do here is apply the Offset Effect. You'll find that under Effect, Distort, Offset, and this is the same filter that was in Photoshop. Now, let's shift the center. What we're going to do here is add a keyframe. I can press "u" to see the keyframe, and then jump to the out point and add another keyframe.

If you double click on that keyframe, it brings up a dialog, and shifting by pixels is a little confusing, but if we change this to the % of the Source, it makes a lot more sense. So now, what I can do is shift this to 150. It started at 50 and it goes to 150, so it does one full rotation. If you take a look at the Preview here, you're going to see just that. Over the course of 30 seconds, it's going to push the panoramic out one side and automatically wrap it around to the other, and as you look at this, it's a lot like standing there in this city, turning and looking, and that allows you to see what's happening.

Now, as you deal with this, you can of course scale this if needed. This will allow you to adjust the height and the overall framing, but this feels pretty good. Let's see it get to the end and jump back to the beginning. It worked. Now, if I press "s" for scale, you'll notice I have a little bit of wiggle room and that I can scale this up until the point where we get overshoot, and we don't see pixels in the top or bottom. So, that allows you a little bit of flexibility. Additionally, if you want to be perfect, I recommend you go to your last keyframe here and instead of setting it here, go forward one more frame into an infinite area, and drag that keyframe over so it technically happens one frame after the layer.

Now, we're going to have a little bit smoother transition. It's just important that that last frame technically appears in an invisible frame so that you don't have a repeated one-frame glitch. Now, when it gets to the end what you're going to see is it will jump from here back to the beginning. Now, of course, you can change the overall speed of this pan by simply pulling these layers in or out if you want this to go faster. So, if you decided that 20 seconds was the right duration, just move the composition, but there's that seamless loop, and it goes right back to the beginning very nicely.

This feels to be good speed though for something like a video wall. Now to smooth this out a little bit, I'm going to select the layer and press cmd or ctrl + d to duplicate it, and what I want to do is just nudge this slightly, so I'll come to this first keyframe here and set this to 50.005. Let's copy that and go to the last keyframe, double click, and also add that .005.

What I did there was created a second copy, just slightly. Now, if we lower the Opacity of that top copy, it's basically a visual trick to create forced motion blur. That just created a slight ghost or trailing echo so that the move seemed a little more photo-realistic, so it didn't look so computer-generated. You can play with the Opacity of those overlays and tweak it as you see fit, but sometimes doing that is a good idea. Now that we've got the loop, let's just go back to the Project panel and clean things up a little bit.

I'll put this in a folder called Sources, and we'll call this Looping Zadar. That looks pretty good. Let's save our work and then we can add some design elements to make this more suitable for our Mo Graph project.

Video: Using the offset method with a 360-degree panoramic photo