Using a null object to group and keyframe multiple effectors 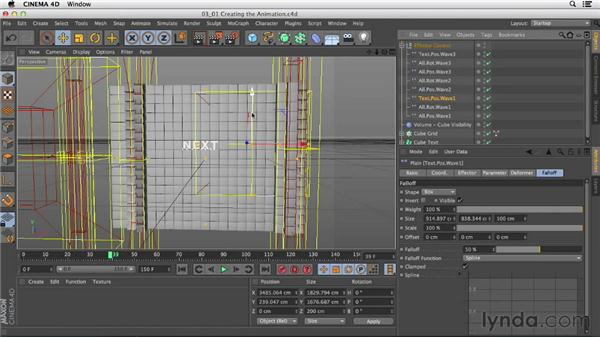 By building an animation entirely of MoGraph effectors, you can easily apply and adjust the animation by simply moving the effector's falloff position. Here I'll show you how to set up the scene so that you can control the entire animation with just two keyframes. So we have all of our effectors applied here and if I just have them all selected and move them all over the left here, and if I just click and drag and have these effectors pass through our cube grid, you could see the animation that we're going to be going for.

We have our first wave passing through, revealing our first word; we have the second wave coming through and reverting the cube text back to their original rotation; and then we have our third wave coming through and revealing our second and final word, which is the name of our fake TV station Pixel. So now all we need to do is animate all these effectors, and what we're going to do is just, instead of animating each of these, we're just going to drag them all into a null.

So let's create a null, and let's just drag and drop all of these effectors and make them children of the null. And we're going to rename this null Effector Control. This null is where we're going to apply all of our animation keyframes. So now if I zoom out and just move the null, you can see that it's just moving all of our effectors as well. So if I bring all these effectors off to the left here--and I'm going to set a keyframe here.

Let's actually make our animation a little bit longer. Let's make it 150 frames. And let's go out to frame 100 and just drag and have all of our effectors pass through. So that's completed. They're all off the screen, and hit another keyframe. You can see that our last Box Falloff here, which is our text position wave three, is no longer affecting our cube text. We need to make this box falloff large enough so that when all these other effectors pass through, the Box Falloff is still effecting and encompassing that cube text.

So let's just adjust that a little bit. So now if we go back to our frame 0 and hit Play, we have our animation basically played out there. Now, we still need to do some adjustments. It's a pretty fast animation for my taste. So all we need to do to adjust the timing is by moving these falloffs. So the way we do that is if we have this first wave here--let's select all of the waves, and let's just bring these out, give it a little bit more space for other effectors to breathe, and let's go back to frame 0.

You can see that we have our first wave passes through. There's a little bit more time for that word to breath. You can see we still need to make our text position wave one box falloff larger so that it encompasses the cube text for the entire duration, and the falloff doesn't leave until the second wave comes through here, so we need to make sure that it's kind of touching the second wave effectors here as well.

So I think that's set up pretty nicely. Let's go back to frame 0 and hit Play again. So we have NEXT and a beat and then the second word comes up. So I think the second wave is coming through a little fast as well, so all we have to do to adjust that is come in here and maybe just spread out and adjust the falloff here so it's a little bit smoother, maybe the position wave two here. Let's go in here and pull these handles. Let's actually move our--maybe a little bit forward here, and let's actually select all of our wave three and have them come in a little bit later so all we have to do is push them back to the left here.

So there's a little bit more breathing room between when the first word comes on and off and the second word comes on. So let's hit Play again. And I actually have to adjust our effector control. You'll see that at frame 0, since we moved the first wave of effectors forward, we actually need to push this null back so none of the effectors are effecting this grid just yet. So let's hit another keyframe and that replaces the old keyframe, and let's hit play again.

There, first wave, second wave, and third wave. So let's say we want less space between when this happens and the second word comes on. So we want the second word to come on a little faster. All we need to do is select our third wave effectors and just move them up and move them a little bit closer to where that second wave of effectors are. So now if I go back to frame 0 and hit play, we have our first wave, and then our third wave comes through, revealing our second word.

So I still say that we should have a little bit more breathing room for that first word. We need to make sure we can read that. So again, all we have to do is select our first wave, bring it forward. You just make this Box Falloff bigger. And let's go back to frame 0, again making sure that we adjust the position of the null so none of the effectors are applied on frame 0. Hit another keyframe. Let's zoom in and let's hit Play again. NEXT PIXEL.

So there we go. That feels a little bit better. NEXT has a little bit more room to breathe, and we got the second word revealed. Setting up the animation in this way gives you more of a visual way to create your animation. You can physically see where the falloffs are and how the animation is being applied to your scene. This allows for saving a lot of time not having to deal with many keyframes in case you need to change timing.

2/27/2013
Harness the power of the CINEMA 4D MoGraph module to create complex animations with only a couple of keyframes. By stacking multiple MoGraph effectors, you can achieve nice-looking animations quickly and easily, saving you time spent keyframing moves manually. Discover how to change your text on the fly or create iterations of it, while keeping the animation intact. Author EJ Hassenfratz introduces a real-world postproduction workflow, by creating a network bumper promo. This project covers creating 3D text in CINEMA 4D, compositing, and adding final polish to the footage inside of Adobe After Effects.
Topics include:

Q: I rendered a Compositing Project File (AEC) from CINEMA 4D, but I am unable to import that file into After Effects.

A: In order to import an AEC file into After Effects, you will need to have the free Cinema 4D Importer plugin for After Effects installed. The plugin can be downloaded here: http://www.maxon.net/support/updates/plugins.html