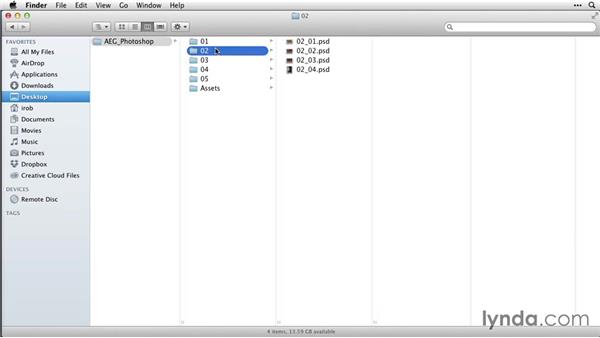 Join Ian Robinson for an in-depth discussion in this video Using the exercise files, part of After Effects Guru: Working with Photoshop Files.

If you're a premium member of the Lynda.com online training library, you have access to the exercise files. Now, if you don't have access to the exercise files, you can definitely just follow along with your own files. But for those of you who do, let me explain how the files are set up. You should notice all the files are downloaded into one folder. If you need to move these files to any other hard drives on your computer to save hard drive space or what have you, I recommend moving all of the files within this one folder. Please don't move around any of the folders or files within your exercise files.

You can save different versions of your files within those folders, but again, let's try and keep the hierarchy set up the way it's set up currently. Now, you should notice that we have individual folders numbered based on the individual chapter. Now, not every chapter is going to have exercise files and not every individual video is going to have exercise files. And in certain cases, some videos will have more than one file. In those cases, I'll call out exactly what application we're working in, whether we're working in Photoshop or After Effects.

Since we're working integrated between both applications, we'll bounce back and forth between both pretty regularly. Now, if you ever find that there are files missing out of your After Effects projects, chances are, those files are in the Assets folder. In here, you'll see video files and some presets, as well as some exported Photoshop documents that we will be creating as we move throughout the course.