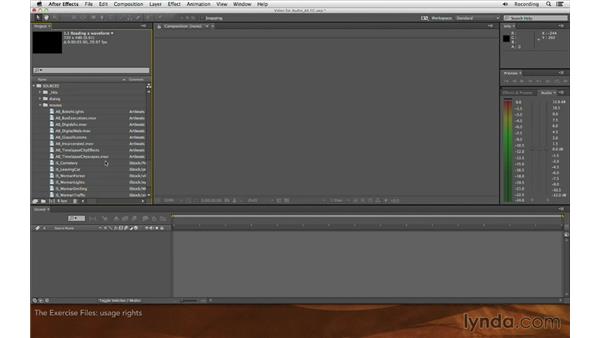 I'm recording this course using Adobe After Effects CC for creative cloud. However, none of the techniques I'm going to be demonstrating are exclusive to cc. If you have any recent version of After Effects You will be able to replicate the techniques I'll be showing here. And for that matter, I feel confident that you can adapt the general principles to almost any software, be in a non-linear editing package, 3-D animation package, or another piece of motion graphic software. If you do have After Effects, and if you do have access to the exercise files, I've supplied two versions of this project file.

One that works in After Effects CC and one that works with After Effects CS6. Open the appropriate version for whatever software you're running. If you happen to have After Effects CS 5.5 or earlier, I'm afraid you won't be able to open this exercise file, but again I really think you can follow along and get the idea of what I'm trying to show. Although I am using the standard work space in After Effects, I do tend to make a few small modifications as I work. One, I tend to close up the preview panel to take up a little less screen real estate. Two, I tend to move the audio panel and dock it into the same frame as the effects preset panel. That gives me more room to see the audio meters and changes in my audio levels. I tend to set preferences, previews, viewer quality, zoom quality to more accurate.

That way if I have to view a composition that's some odd number, less than 100%, such as 81.7 or whatever, it will be anti-aliased on my screen. You might consider doing the same. The other thing I tend to do with all of our projects is down in the Timeline panel, I tend to move the column for the AB switches to the far right. The defaults to the far left, but I prefer being closer to my bar's actually appear in my timeline display. The last thing I want to notice that I have provided quite a bit of source material along with this course but it's only for your usage for this course.

You may not reuse any of these videos or music in your own projects. In particular I've supplied a couple case studies that show finished projects of various clients of ours and various stock music houses and companies such as Nvidia have been very generous in allowing me to share this with you. Please respect their copyright and usage rights by not reusing any of this content for your own projects. And speaking of clearances and rights, let's talk briefly about music licensing. The one thing that you cannot do is just rip an audio CD or download a track from iTunes or Amazon and use that music to go along with your visuals. Even if it's just a demo reel, even if you're not charging for it, you can't do it.

Any time you synchronize visuals and sound, you need a separate synchronization license. This is sometimes referred to as sync rights, as negotiated separately with whoever owns the music or the sound, and the separate, whatever license you got when you downloaded music or bought the CD. There's also the issue of performance and broadcast rights if you're broadcasting on TV, if you're having your say special animation played back in a sports stadium, et cetera. Those venues also need rights to perform that soundtrack so that the money finds its way back to the person who created the music. So I strongly recommend that you either make sure your client has all the clearances they need, or that you've already made the clearances yourself or perhaps you want to work with a musician yourself.

Do it as a buyout license where you get all of the rights and don't have to worry about this. Work with the stock music house that's familiar with these rights and assigns them to you when you buy the rights to the music. Or you might even create the music yourself, using something like Sony's Acid, Apple's Garage Band, or my favorite, Ableton Live. Regardless, the point is know and respect the copyrights of people who create the contents you're using. Because after all you'd expect that from them as well. Okay, with all that out of the way, let's dive in and start understanding what all those strange little squiggles on the screen really mean.