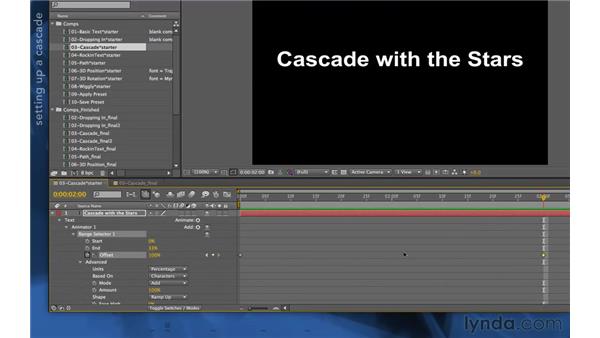 Join Chris Meyer for an in-depth discussion in this video Using character anchor points, part of After Effects Apprentice: 06 Type and Music.

Now, in the last movie, I covered in detail how the cascading text animation works,…and I used the Position property for that example.…In this movie, we'll create another cascading animation, this time using Scale.…I'll also show you how to adjust the anchor point so characters don't always…have to scale around the baseline.…I'll return to my Cascade*starter composition, and since I already had an…animator, I'll select it and press Delete.…If you don't have the exercise files, go ahead and create some white text on…a black background.…

The first thing I'll do is press the Animate button and select Scale.…This will add Animator 1, the Range Selector, and the Scale property.…I'll twirl down the Range Selector and just check that I am counting in percent.…If I increase Scale, you can see that the characters scale around their…individual anchor points.…You'll even see a small x at the baseline of every character.…This shows you the position of the anchor point, and that's a new feature in CS5.…

4/28/2011
One of the cornerstones of motion graphics is creating and animating type. In this course, Trish Meyer shows how to typeset titles professionally and create custom animations, as well as apply and modify the hundreds of text animation presets that After Effects ships with. Additionally, Chris Meyer shows how to add audio to projects, including spotting "hit points" to align keyframes and video action.

A: We have added four new movies to the end of Chapter 8, "Working With Audio." All four of these movies (Spotting dialog, Timing dialog to music, Mixing audio, and Refinements) apply to all versions covered by the course. In addition, there are new sets of exercise files designed for After Effects CS5.5 and After Effects CS6 and a companion movie that shows our premium subscribers how to use the exercise files.