Using the camera tools with the active camera 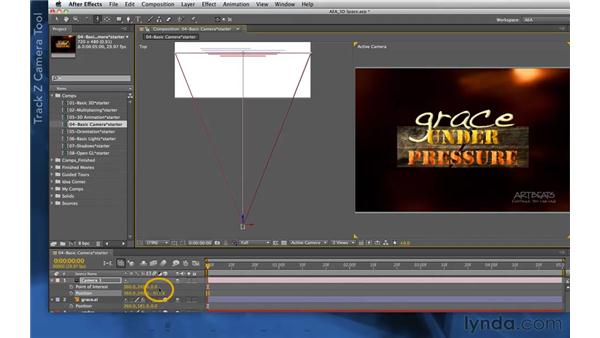 Join Chris Meyer for an in-depth discussion in this video Using the camera tools with the active camera, part of After Effects Apprentice: 11 3D Space.

In the previous movie we added a camera to our scene;…before we learn how to animate it, I think it's important to learn how to use…the Camera tools, both in the Active Camera View and in the orthographic views.…The most important thing to remember about the Camera tools is that they operate…differently depending on which view you're working in.…If you use any of the Camera tools directly in the Active Camera View, you're…actually changing the values for the Point of Interest and Position.…In other words you're moving the actual camera.…

When you use the Camera tools in one of the orthographic views, you're only…changing the preview, not the actual camera.…I'll show you why it's so useful to optimize your view in the next movie.…For now, let's just focus on using the Camera tools in the Active Camera View.…I'll select my Camera and these are the default settings for a 50 millimeter camera.…If you've been playing with the camera, simply twirl it up and down again and…click the Reset button;…

Video: Using the camera tools with the active camera