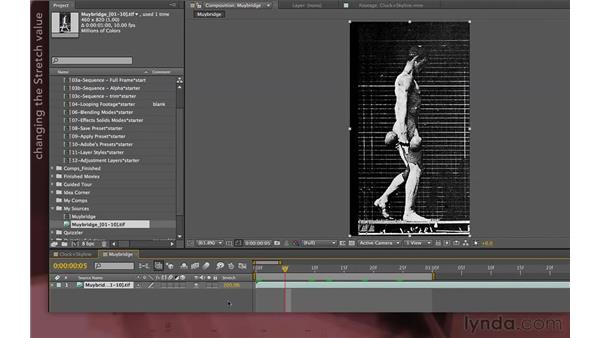 There's a couple of different ways to change the speed of an image sequence, but which one you choose has important implications. So we can see what's going on I am going to search my imported sequence. Click on Interpret Footage. I am going to have it loop just one time, just play through one time, so you can more clearly see what's going on. Go back to start here and press the plus key a few times to zoom in on the timeline so I can what's happening here. So there is my sequence at 10 frames and we're done. I am going to go to my end, press N to end my work area, and RAM preview. There we go.

Let's say that I still think that's too fast and I want this to play at half speed. There's a couple of ways of doing that. One is to open up the Interpret Footage dialog and slow down the frame rating more, say to 5 frames a second. When I do so, you'll see my layer bar has out-gone twice as long, since it has now been slowed down. each frame takes longer to play. And now when I RAM preview, you'll see there is a much more sedate pace. However there's another way to do this. Go back to 10 frames a second in Interpret Footage dialog.

I'll right-click on any of these headers in my Timeline panel and choose Columns > Stretch. I can also stretch it by 200%, which will double the duration of this clip, or any layer inside After Effects. Click OK. RAM preview and I've accomplished the same goal. This is a real handy trick when you've got one image sequence or one movie for that matter. You can bring it into a comp multiple times, give each one a different Stretch value and they'll all play back at different speeds. Really great if you've got sequences of say numbers, or other background paraphernalia that you're using just to make a comp look busy.

However, there is a problem with using Stretch. I'll go back to 100% for now. Let's say that I set a careful fade up. I'll press T for Opacity, enable keyframing, and my first keyframe at 0, and my second keyframe at 100%. Now I've got a little fade up at the beginning of my sequence. If I were to use Stretch to slow down or to speed up the sequence of this layer, you'll see that my keyframe has moved as well.

So my fade up is taking twice as long. If that's not what you intended, don't use stretch. If you want to change the speed of your source footage without changing the spacing of any of your keyframes, instead of using Stretch, use the Interpret Footage dialog. Change the frame rate here, such as to 5. And it will lengthen my source, slowing it down but not move the position of my keyframes. Now my fade up is of the same duration. The Interpret Footage dialog processes footage before it's used in a composition, before you've applied any transformations, keyframes, etcetera.

An important distinction. So, the Stretch trick is useful for just filling up a frame with things of different speeds. But it will get you in trouble with keyframes. I tend to use Interpret Footage dialog whenever I can for this type of work.