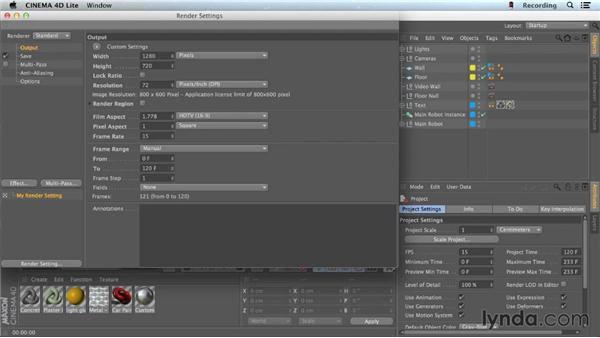 Join Angie Taylor for an in-depth discussion in this video Using the Picture Viewer in CINEMA 4D, part of Learning Cinema 4D Lite for After Effects.

In this movie we're going to have a look at previewing your footage. Now, in After Effects, you generally do a Ram Preview when you want to preview your footage in real time. And what that does is it loads the frames into ram and plays them back into real time for you. It's important that you see things playback in real time and at full resolution. So, that you can check your output before you actually go and render your final project. Now we're in Chapter 2N, so if you want to follow along you can open that, too.

And here you'll see I've loaded a few frames into ram, by hitting the Ram Preview button over here. 0 on the number pad is the shortcut or hot key for doing that. And you'll see that that plays it back with the current render settings in real time. Now, it's important that we do something similar in Cinema 4D. If you're new to Cinema 4D, you need to figure out what the best way of previewing is. So, we're going to select the file in the timeline and just hit Cmd + E to open up our file in Cinema 4D, and here it is.

Now, in Cinema 4D, I can press play Shortcut for that is F8 if you're on the Mac. You need to make sure that your F8 key isn't being used for a system level shortcut. But anyway, F8 placed forward, so I'm going to use the button so you can see what I'm doing. (SOUND) (MUSIC). Okay. So, you can see that I've got my animation going there, and you're going to learn a little bit more about how to do that animation a bit later.

But you can't guarantee that that timing is exactly right by viewing it in this main view port here. This would be kind of like it's in space bar in After Effects. Also, you're not going to see it with the final settings or the render settings here. In order to see that, you need to render it. Now, you can just render, you can click on these buttons up here. This one here will render the view. Or you can hit Cmd + R, or Ctrl + R on Windows to render that view.

But, a better way is to use the Picture Viewer. And the Picture Viewer will use whatever settings you've set up in your Render Settings. So, if we have a look, go to Render > Edit Render Settings, you'll see it will render it with these settings here. Now at the moment, it's going to just do the current frame. But if I put that to from 0 to 120 frames, it's going to render the whole animation. And we'll have a look at both of those, so at the moment, I want to see the timing of the animation.

So, it's important I render all the frames. So, I'll switch that on. And then when I come up here to my Picture Viewer, and I can click on the little black arrow and choose from this menu, or I can click on the Mend button to render to the Picture Viewer. OK, there's no name, filename specified for the rendering image, but, I'm just going to leave that for now and click on Yes. As we render it. And you'll see what it's doing, it's starting to render all the frames in the animation for me, and it's going through them one-by-one.

Now I can stop that at any time by just clicking on this button. And that's going to stop the rendering of those frames. But one that stops rendering, I can be sure that when I hit Play Forwards, it's going to playback with the correct timing and the settings from my Render Settings. So, let me just play that Forwards. (SOUND) It's a much more reliable way of checking your output. And of course it will save these files. So, as you work through your project, you can save different previews and check your timing, and have a reference to the files that were used for those previews.

Now, if I only want to render one frame, there are options in here actually. You can go in and adjust the Frame Rate. So, maybe you only want to render one frame a second for example. Or you may decide that you want to adjust the Render Settings while you're working on things like lighting and materials so that you're only rendering one frame. That's particularly useful when you're trying to optimize your project which we'll be doing later. In order to do that you go back to your render settings and just change it so it's 0 to 0 or, you know, there's only one frame being rendered.

And now if I go and hit the Picture Viewer button, it's only going to render one frame for me. So, depending on whether you're wanting to check the timing or the quality of the image, you would choose different Frame Rate Settings. Now, there's also buttons up here for all sorts of useful things. You can clear the cache, get rid of any of the files that are in the cache. You can render it Full Screen, you can Show Title Safe and Action Safe Zones, you can Show the Color Profile, have that displayed, and you can also do an AB Comparison of different render settings.