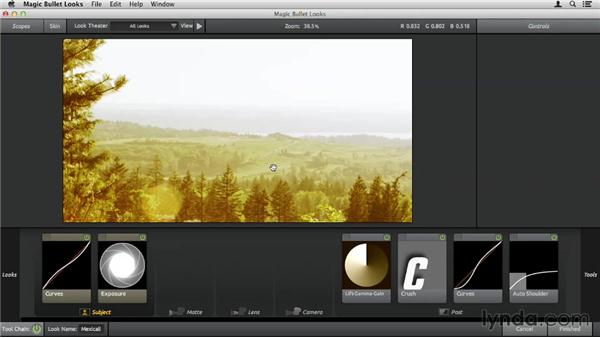 Lets look a little bit more closely at using Looks Presets. Let me first explain this project here. I basically have this four k red footage, it's actually just a single still image. But it's 4096 by 2160 pixels. And it's in a two k composition, so it's scaled down. The reason why I want to to show that to you, is because what we're going to see with Looks is actually pretty great. It's not going to only apply the effect to just what we can see in the comp, it's going to apply it to the whole image regardless of the scale settings, or regardless how it's framed in the composition, which is really great. So, I applied Looks, now I'll go ahead and click the Edit> Looks Editor. And now, we can go over to the left, and you can see, that there's this huge tree here, we didn't see any of that tree in the After Effects window there. And now, we can see the whole entire shot, which is, again, really great for grading, because if you decide, later on, to move this shot, It will already be graded and it will already be in a way that's predictable because you'll know what it's going to look like.

Now I'm going to go over to the left hand side here again and we have again these presets. We have the basic presets which do very basic things, just cool it, warm it, Contrast, Sharpen. And often times you want to go in and maybe apply this preset. And then go into lets say for example Warm and Cool. I'll click on that adjustment. That tool. And then we'll go over to the, over to the controls in the upper right hand corner. And then we can dial that back a little bit. We might want to take down the warmth and increase the coolness a little bit more.

So it's not as warm. We also might want to take down the tint level. So each of the tools will have different parameters that you can use to adjust your footage. I often like to think of these presets as kind of jumping-off the points, ways to get started. Remember that as you change another preset here as we click another look. It's going to completely replace everything that was there before it. So that, when you click on a preset, let's say Romance for example.

I can also press the letter t to open up the opacity for that adjustment layer, and I can dial it down by taking down the opacity until I get a better effect. In some host clients, such as Final Cutt Pro 7. There will be a mix slider and you can actually dial back the look, or the strength of a look, using the mix slider. That's an amazing feature that I really wish were universal through all the host applications, but it's, it's not unfortunately. But this little work around with the adjustment layer does definitely help the flexibility of looks quite a bit. Now another thing its kind of cool is if we go over to the Red Giant website, its redgiantsofware.com and I'm on the Magic Bullet Looks page and I'm going to scroll down little bit because actually a presets tab here as this explain the features and all I can stuff, all as marketing stuff, click on Presets and its this really nice gallery of what the presets look like. And the categories are up here at the top.

So I can click on emulation, and then now here's all of the emulation presets for example. And I could mouse over this and actually see video footage of what this looks like playing back. Is a negative, color reversal old style. As we browse through those presets and really see what they're doing without having to manually click and apply all of them. The help files that ship with Magic Bullet Looks also contain a gallery of the presets. So again, Looks are a great way to jump in and get started with Magic Bullet Looks.

I find them to be a little bit overkill. But they are great jumping off points and they really help if if your using an adjustment layer in after effects or in premier or if your using that mix slider.