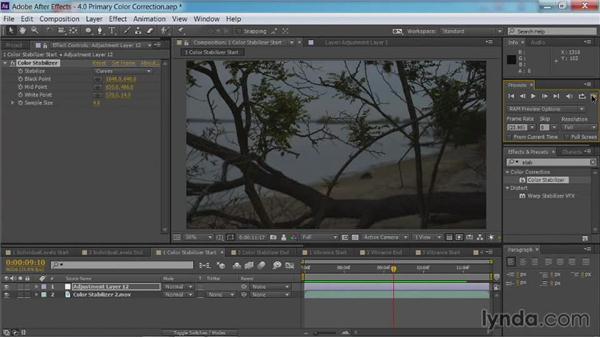 Sometimes with a primary adjustment you may deal with a situation that changes over time. Everyone of the effects and after effects can be key framed. But sometimes it's difficult to key frame something that changes erratically. If you'll look at this, you'll see that the director of photography was adjusting. The variable and defilter, trying to find the right exposure. Or perhaps similarly, in a longer scene, the cloud coverage could be changing. What I need to do is stabilize this shot a bit and there's a cool effect called the Color Stabilizer.

Let's add a new adjustment layer. And we'll type in Stabilizer. There it is. This allows you to set the different points. Let's turn that off for a second, and what I'm going to do is stabilize the curves. I need to identify something that should be black, looks pretty close there. Something that should be white. Let's try these clouds, and a mid tone. I'll try this beach for right now. If I look at that effect, it's attempted to stabilize. Adjusting the sample size will affect a broader area around those pixels and average out some of the results.

Let's preview that effect for a moment. And while there's a slight variation, you see that the changes of an exposure have essentially been neutralized. By clicking the set frame button the exposure is adjusted a bit. Now I could follow this up with a curves adjustment, just to refine the exposure. The first part is get the shot stable, the second is get the exposure you want. So with a simple curves adjustment there, I've really gotten it to a good point. And, if I play that back in real time, you'll see that all the fluctuation and variation has been taken out of the shot.

Compare that to the original shot, let's mask this so you can see the two side by side. I double click to apply a mask to that layer, and I'll press control or command T for free transform. Let's just split that in half. And, watch the effect. On the right, is the original shot, you'll notice here that the variation is very intense, but on the left. By using a color stabilizer effect and a curves adjustment to refine it, I've essentially removed all of the fluctuation within the shot and, to me, this is a near miraculous fix.

Let's go ahead and just drag that mask back, so it affects the whole shot and take a quick look. It's a very stable shot, there's minor flickering, but compared to the original, it's substantially improved.