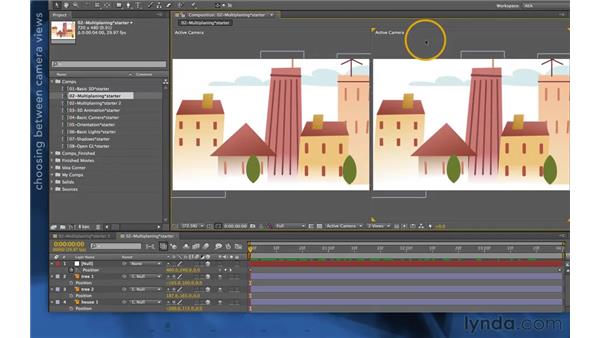 Join Chris Meyer for an in-depth discussion in this video Using 3D views, part of After Effects Apprentice: 11 3D Space.

As you work with 3D layers in After Effects, you will quickly realize that the…simple Comp Viewer you may be used to from 2D layers just doesn't cut it, you're…going to need some additional perspectives on your scene.…So before we go any further, let's explore how to bring up those alternate views.…I'm going to go double-click 02- Multiplaning*starter, my original…starter composition.…This is the scene as before.…All of my layers have been Parented to an animating Null.…I'll type Command+A on the Mac, Ctrl+A on windows to select all of my layers.…Enable a 3D layer switch for all of these layers.…

Initially not much changes, except for the appearance of these axis arrows, and…type P to reveal the Position properties for all of these layers.…You'll see that my Null Object is animating along X, but not in Y, and its Z is set to 0.…And for Children of other layers, their Position parameters are offsets to the Null Object.…In this case all of their Z values are also 0, indicating they're all in the same plane.…