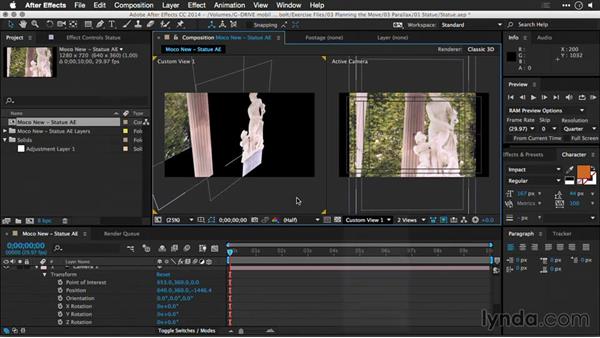 - Let's take a look at a built project and I will show you the parallax and depth in action. I'll start by opening up this After Effects project. This is for the statue and pillar we've been looking at. Initially, when you import these in, it comes in as separate pieces. There's our trees. The columns, I just left this one be in the background here. And our statue and all of those separate pieces. What needs to happen is that these get spread out in space.

Now I'll start by adding a 3D camera. Layer, New, Camera. Don't worry, this is a technique we're gonna explore several more times. I'll go with a simple preset, like 35mm. Click OK and the camera is added. Now, I enable these layers in 3D space by clicking the cube icon. If I twirl down the disclosure triangle, I could see all the transform properties or, quite simply, just press "p" for position.

Now, as I push this back along the z-axis, it goes further away, essentially getting smaller. I'll just fit this onscreen. I'll press "s" for scale and scale that back up until it touches the edges of the frame. The columns need to go back a little bit, "p" for position. Push those back slightly.

And then "s" for scale and drag up to scale larger. Don't worry about this technique, we're gonna explore this much slower coming up. This is just me showing you, nearly a real-time performance of how this works. What I just did is I pushed the layers apart along the z-axis and then scaled them so they looked to be their original size. Now that that's done, I'll just set the composition here to match a video size, such as 720p.

And we've got our 3D camera. Well, as we take that camera, it's got controls. So I can move that along the z-axis and push it in. You see how that creates a sense of perspective. Now we're gonna deal with things here in just a moment by filling in the backdrop, but watch as we animate things. As that camera moves its point of interest, or its position, things seem to change.

Now I typically like to look at this with two views. On the right, I leave that set to Active camera and on the left, I'll choose Custom View 1. This makes it really simple to just grab the camera and pull it in. For example, I could start here on the subject and it looks pretty good, I'm just gonna scale those trees up a little bit more so they fill in more of the background. And now that camera can animate.

By animating its position and point-of-interest, the stopwatches in After Effects just add a keyframe there which holds the initial position. Going forward in time, I can grab the camera, move it back a little, slide it up the statue, go a little bit to the right but pan the point-of-interest back.

And if we animate that, you'll notice as it plays that the two objects, which are at different depths, the pillar and the statue, appear to have their own movements and speed. They're moving at different rates which is also different than the trees, which are further away. Now I've saved a version of this project complete and you can open that up and explore it as well. And there's also one more file in there that you cold play with if you'd like to explore this technique on your own. We're gonna build this from the ground up at a much slower pace with greater detail, but I want you to notice key things here.

As the camera moves, you can see that camera movement. You can also see where the camera's pointed which is its point-of-interest. These create smooth movements as the camera goes through the scene, changing its depth and its position. Because the objects have different physical space, it creates a sense of perspective. If we look at 4 Views here, you might see this even better.

And by changing its position, the end results through the active camera give you that sense of depth, or perspective. And that movement of objects moving at different rates based up on their z-position, leads to the visual effect that we typically refer to as "parallax."

1/29/2015
Have you looked at a photo and wished you were there, or wondered what the scene looked like to the photographer? Now you can bring your photos to life by adding motion and depth to your images. Author Rich Harrington reveals how you can transport your photos into a three-dimensional world, using Photoshop and After Effects CC. The course shows you how to select the right images and resolutions, how to use masks and layers to build the composition in Photoshop, and how to animate the camera and light the scene in After Effects. Plus, learn how to use particles to add depth to your scene, mix in video, create 3D perspective, and render out your composition.
Topics include: