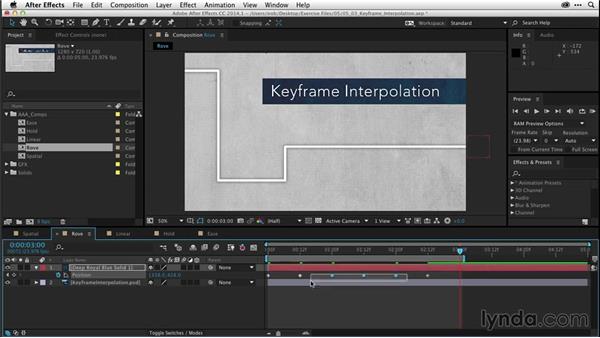 - Understanding Keyframe Interpolation is a surefire way…to take your animation skills to the next level.…In this project, we're going to animate…this layer solid to move along the path.…That's gonna give us the perfect example to show you…all the different kinds of variations you…can create on an animation,…just by adjusting the keyframe interpolation.…Just so we're all on the same page, let's double click…the spatial composition in the project panel.…Notice our current time indicator is at 2 seconds.…So, let's go ahead and move it back…to the beginning of the timeline.…

You can also press home on your keyboard.…Now, the easiest way to move this box around,…is to utilize automatic keyframing.…So, let's look at the top section of the tab here…where these three lines are.…Click on that, and enable auto-keyframing.…You'll see the auto-keyframe button…highlight here in the top center of your timeline.…Now let's select layer one.…And I'm just gonna move this in the comp panel,…making sure that I don't click on the center…