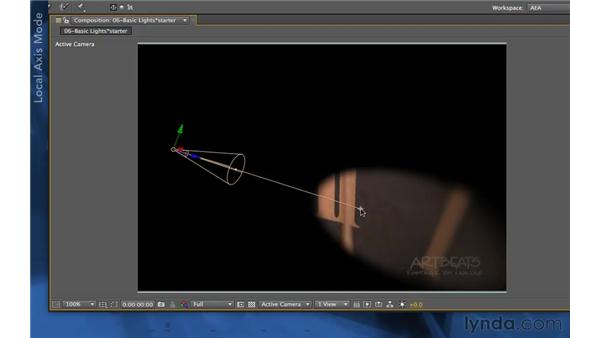 Join Chris Meyer for an in-depth discussion in this video Understanding the axis modes, part of After Effects Apprentice: 11 3D Space.

In the this sidebar movie I'd like to show you a few more tricks on how you can…move 3D layers, lights and cameras in After Effects.…You can just watch, but if you like to follow along.…I'm going to open up Comps 06-Basic Lights starter;…you might already have a light in there leftover from an earlier movie in this lesson.…If you do, you can use that, if not, just add a layer>New>Light and choose a…Point light to start, and in fact, I will change my light to point here.…By now you're familiar coming with the Axis Arrows X, Y and Z. When I place my…cursor over say the X axis arrow, and get the little letter X, as I drag, our…movements are constrained to the X axis, and as I do so, you can see down in the…Timeline panel that only the X value is changing, same for Y, and same for Z.…

However, things change with a spotlight and to create a display I'm going to…press P to get just the position, and Shift+A for the point of interest.…Now this axis arrows for the back of the light, it's position, reflect how the…