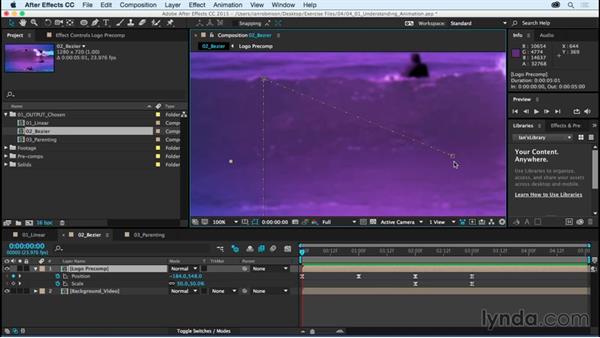 - There are many different things that control how key frames work inside of After Effects. In this movie, I'm going to provide a quick overview of some of the different kinds of key frames, and other methods available for animation inside of After Effects. Throughout the rest of this chapter, we'll be going more and more in depth about these techniques. In this video, I don't want you to try and follow along, so please let go of your mouse, and just sort of watch for a moment. If you notice in the project panel in the upper left corner, I have three compositions. Let's start with the 01 Linear Comp.

I'll double click to make sure that it's active here in the timeline. And let's select "layer one", and just press the "u" key or the "uber" key to reveal any animated properties. And notice you can see this line here and this is called a "motion path". This is what happens when you set key frames that change the position of an object. Now, to show you the animation, let's go ahead and just press "play" on the preview button here. And notice I've got my logo and you know, it's not a fancy animation, this is just more for the example.

This is what's called a "linear animation", because these key frames shaped like diamonds are linear key frames. So the object, or the logo, is just moving in a linear fashion between each of these different points. Let me press the space bar and just stop playback here for a second. I'm gonna scroll on my mouse wheel to zoom in, and I'll press the space bar to grab my hand tool here. And I want you to notice these points. See these points? Notice how the space between these points are exactly the same.

That's because it's moving linearly, there's no acceleration or deceleration. Also, the space between the key frames denote a speed. So for example, if I draw a lasso around these last two key frames here, and select them, I can go ahead and just click and drag to the left and what this does it shortens the amount of time my logo has to move between the second key frame and this third key frame.

So as it shorten the amount of time, notice the spacing between each of the key frames is longer. So that's letting me know it has to travel further to cross this distance in a shorter amount of time. So when you're working in a linear fashion, here I'll just change my magnification to fit back up to 100 percent. When you're working in a linear fashion, you can see it's a rather mechanical animation. It's not very smooth, and it works great anytime you're trying to simulate something that's sort of mechanical in its movement.

I'm gonna press the space bar and stop playback here for a second. And let's go to our 02 comp. I'll open that up here. And in my Bezier Comp, this is letting me know that I have a different kind of key frame. I'm gonna select layer one and just press the u key to reveal these key frames. And notice the shape of these key frames here if I click back to my Linear Comp you can see these are diamonds, whereas these are the inverse, they look sort of like hour glasses. Now, the movement of these key frames are called "bezier", and if I go ahead and zoom into 100 percent magnification and move over here, notice how close these points are at the beginning, and then how they space out over time and then just towards the end here they get closer together.

So this denotes that there's gonna be a change in speed between these key frames. And this is a much more natural motion. Think of yourself in a car when you're at a stoplight and you go to accelerate, you're starting from zero but you are accelerating up to speed. And then when you go to stop again you put your foot on the brake and you decelerate until you stop again. So, let's go ahead and preview this animation. I'll change my magnification to fit back up to 100, and just press play in the preview panel.

So here notice also the logo kind of stops at each individual key frame. It's moving, and it pauses, and it moves. Now, let me press the space bar one more time to stop playback. I wanna show you another method for actually viewing what's happening between the key frames. See, we already have visual cues by the style of the key frame, but there's a thing called "the graph editor", and if I click on that it shows me the speed at which the object is moving between the key frames.

So as I move here you can see it's starting at zero and it's accelerating to its highest point which is in between these two key frames and then it's decelerating down to the next key frame. And it stops just for a moment, and then it speeds up again. If we go back to the linear example and I open up my graph editor here, you can see there's no change in speed that ramps, it literally just moves at a constant rate and then from one frame to the next it automatically changes to a higher rate of speed.

If you hover your mouse over the line it'll show you the different values for how many pixels per second it's actually moving. Now, the last thing I wanna show you has to do with a different way of creating animation inside of After Effects. We know that we have key frames, we know that we have different kinds of key frames. But if we open the 03 Parenting one, you can see here I've got three layers, and if I move you can see I've got this circle, this dark circle that's behind my logo, and if I highlight all these layers and press the u key to open the key frames, notice only one layer has key frames applied to it.

That's our logo layer. It has those eased key frames applied to it. So how is this circle following along? Well it's following along because it is the child of this parent layer. So if you notice there's this column here called "parent". If you don't see this column you can just right click next to the layer name here in columns, you wanna make sure that parent is selected. So here it's saying it is going to follow layer one. So, as you create animation inside of After Effects, you can create your initial key frames in a linear fashion.

And then you can kind of smooth out that motion by changing them to a bezier key frame. And then once you do that, if you want other elements to kind of interact with that animation, you can take advantage of other animation techniques such as parenting, to actually have objects follow other objects throughout the scene. So you don't have to key frame absolutely every single layer. Setting key frames is really just the start of the process for creating animation. It's really when you dive into the finer details of creating an animation that you'll begin to progress as an animator.

If you ever feel like you begin to lose familiarity with any of these terms, please feel free to watch this video again for reference.