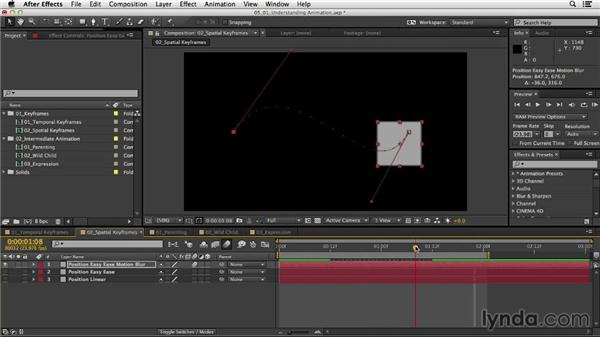 Join Ian Robinson for an in-depth discussion in this video Understanding animation, part of After Effects CC 2013 Essential Training.

Now before we get started in animation it's important to have a firm foundation as to how animation works inside of after effects. So I've created a couple of very simple project examples so we can have some reference to talk about. I'm going to start with this 01 temporal key frames composition. I'm going to load up a ramp preview here, and you can see I have a scale and rotation. These are known as temporal keyframes, because it's not keeping track of any spacial data. So let me go ahead and stop playback here for a second. Now if you notice the animation actually stopped in a very abrupt pattern. If you turn off the visibility of layer 2, and turn on the visibility of layer 1, you can go ahead and rotate here.

And notice now this looks like a much more organic motion. This is called ease or easy ease inside of After Effects. The key frames ease out of one position and ease back into another. And let's stop playback there. Now if you want to see key frames on any layer or any kind of animation on any layer. You can have those layers selected and then select the u key, the uber key, to open up any of those keyframes. Notice linear key frames look like diamonds and keyframes with these, look like the greater than or less than symbol.

Now you can navigate between keyframes and with these navigation arrows. And when you're parked on a key frame, you'll see the golden diamond actually filled in. Any time your current time indicator is off of the key frame, notice there's no diamond in the time line. Now, let's look at spacial key frames. And go to Spatial here, we have a position keyframe and it's a linear animation. If you look at the line here, you can see these dots are all in the same place all the way across the line. That's letting me know that it's going to travel at the same speed across the animation. So, if I load up a RAM preview here, you can see it's moving in a linear fashion. It just starts and stops very robotic.

I'm going to stop playback here. If you turn the visibility of three off and then turn the visibility of two on, these have Es. And notice how the points on the motion path are tighter together at the beginning and end. Let's load up a RAM preview of this one, and you'll see it looks much more organic. It's kind of like driving a car. You speed up, and then you gradually slow down. Now, another term that you'll see in animation, in addition to Ease, is Motion Blur. So let's turn on layer one.

And this layer has ease on the keyframes, but it has motion blur applied to it, so it'll have a little bit more of a realistic view when you're actually watcing it. I'll stop playback here for a second. I've been referencing this line in the middle. And this is called a motion path. If I click on any one of the ends of the motion path, I can select keyframes, or I can just change the motion path. Now we'll get into how to do this a little bit later in the chapter, but I wanted you to see the motion path. And notice how the blur will now adjust as the motion of my object changes. Alright, parenting is one of my favorite styles of animation. This starts off our intermediate style of animation. Parenting causes one layer to drive the other layer. Notice we have a parent column here.

If you don't see that column, all you have to do is right click on the gray area of your timeline. And then you can go to columns and choose parent. Now the parent of layer one is layer two. If I turn the parenting off and then go ahead and preview that animation again, notice. The cube for layer two is the only thing that's animated. If you want to double check that you can select both layers and press the u key and sure enough. So the child layers choose the parent, and again we'll show you all of this in the chapter. It's just important to understand how it's working. Now this is my own name, I call it the wild child. But just to reinforce how parenting works, you can have the child layer doing its own animation.

This one is just kind of bouncing back and forth. The second we add the parent to that animation, notice the child's not really changing. But I can go ahead and select my parent layer and press P to open the position key frame. And let's add a key frame here. And I'll just move it down 12 frames and slide it over to the right here. Now notice as we preview this, my child animation is still moving in correlation to what my parent layer is doing. If I wanted to move my child layer closer, I can just move it closer because I animated the anchor point - thats another thing you need to pay attention to if you're going to do animation, the anchor point.

This is the center point at which the layer orbits around, so if I grabbed by rotation tool by pressing W. I could go ahead and change that, and it'll rotate around the anchor point. The anchor point's also good to offset position, like it's doing right here. Since I rotated it, now it's just going to bounce around. And since i repositioned the child layer next to the parent layer I now have the relationship moving a little closer. So the parent layer is controlling the child layer. The child can do whatever it wants. The last example is expression.

Expressions can not only tie together one layer to another, like parenting. But you can tie one parameter to another. So I'm going to draw a lasso over both layers aand press U. In here you can see there's an expression. If I read the expression in my timeline, it says this comp layer named Parent layer transforms the x posiiton. Well, that means if I go ahead and Scrub through any time this layer moves its x position, that value is going to drive the rotation of the child layer. Now, again, we'll definitely cover all of these examples in the animation chapeter. I just wanted you to have a quick glimipse at some of the key expressions and terms that we're going to be using inside of this chapter.