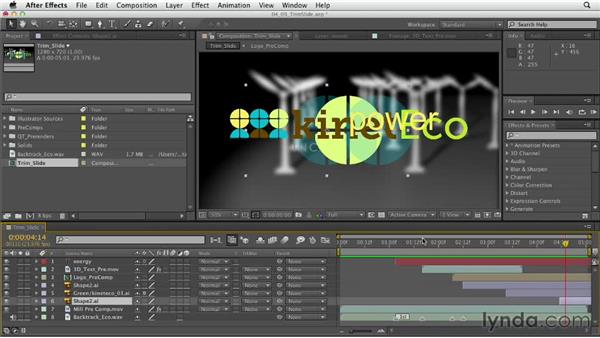 Now in this video, we're going to time the appearance of our graphics to the beat of some audio, and if you look at Layer 8 you can see we've already added some markers to the audio. We did that in the previous video. Now to start trimming and sliding our layers, let's look at how many elements we have that we need to animate. So we have six and a background layer. So we have six markers here. So let's go ahead and just move to start of all these layers to the start of the different markers.

In order to do that, I'm going to click and drag in this number area of my timeline. As I drag, my current-time indicator is going to move, and then if I hold shift it will snap to each one of these markers. So let's start at the first marker. We're going to select one through six. This is our Background layer so we don't need to change the animation for that. All right, to slide layers back in the timeline, you want to use the bracket key. So if you look at the P key on your keyboard, the key just to the right of that is the left bracket key.

So think of that just like a frame. It's holding in the left side of that layer. So when you press it, notice now the left side of the layer has moved to that specific current-time indicator. All right, now we'll click and drag and hold down Shift, so our current time indicator snaps to the start of the next layer. This time we will hold down Command on the Mac or Ctrl on the PC and just deselect Layer 1, and we can left the bracket again to trim the start point of Layer 2.

And let's just repeat the series of commands as we move down the timeline. I'm holding Shift as I drag. I'm holding Command, or Ctrl on the PC, as I deselect a layer and then I'm just pressing left bracket to trim the start point of the following layer. We'll just keep repeating this really quickly, and then I will jump back in with some more thoughts. Okay now if we press the Home key we can move our current-time indicator to the start of our comp and press zero to load up our RAM preview.

(Video Playing) Okay so as you can see, it gets really busy as the different elements are popping into the scene. So what we need to focus on now is actually re-timing some of the elements by sliding them in the timeline, and then trimming the out points of the layers so these elements don't all pile on top of each other. So to get started, let's look at the beginning of our animation which is terribly empty.

So we can start with this 3D Text layer. Just select Layer 2 and press the Left bracket key to slide it to the front. Now to preview, rather than using RAM, I'm just going to click and drag with my current-time indicator. This works well because the word wind pops-up and then energy pops in right after that. So that's great. Now when wind animates away, I want energy to disappear. So I'm going to move my current time indicator just a little bit past the end of our 3D layer here.

Select Layer 1 and press Option+Right Bracket. When you hold down the Option key, that tells After Effects that you're going to trim that layer rather than slide that layer. So it's Option on the Mac, Alt on Windows. Now if we move down the timeline, notice we have our logo pop in. Well that's kind of cool but I want the logo to reveal last. So let's move down the timeline, and let's have our logo actually appear somewhere around 3:20.

I don't want it to be right here at the end just because that's just before the end of our animation. Now we can select Layer 3 and just press the left bracket and we've slid that layer down. Let's go to about three seconds. I'm choosing that number because when I select Layer 4, I want my out point to be there. So let's select Layer 4 and just press Option+Right Bracket to trim the out point. Now I want this next layer to pop in shortly thereafter. So I'm going to left bracket to slide that layer forwards.

And then when we get to this next marker, I want this Green layer to disappear. So as I dragged in the timeline I held Shift, so my current-time indicator would snap to the marker, and now we can press Option+Right Bracket to trim. Okay now there's one last layer we need to have up here, and it's Layer 6. So let's select Layer 6 and press the left bracket to slide it and you guessed it, we'll move down the timeline and Option+Right Bracket to trim it's out point. Now if we press the Home key, we can go ahead and press zero and preview our animation.

(Video Playing) So as you can see, we have definitely created more interest in our animation just by trimming and sliding the layers. Now If I were going to keep continuing to push this animation, I'd focus on adding some effects to that background layer so we can pop or text off of the background and we'll focus on doing some of that in the next chapter.