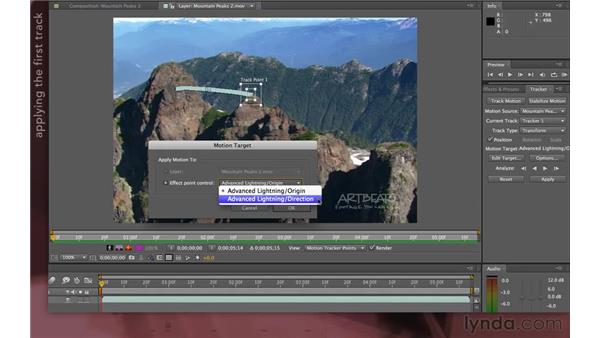 Join Chris Meyer for an in-depth discussion in this video Tracking for multiple effect points, part of After Effects Apprentice: 12 Tracking and Keying.

Earlier in this lesson we introduced the idea of combining motion tracking and effects.…This way, you can identify a feature in your underlying footage, use the tracker…to follow that feature and apply that to some effect point or other position…like parameter in particular effects.…Here we're using radio waves, which is in essence a very simplified type of…particle system, each ring of waves being a particle.…There are numerous other particle system type effects out there including the…great third-party plug-in Particular from Trapcode, but there are many other…effects that also have effect points including things such as lens flares.…

Well, not all effects have just one point, some have multiple points.…For example lightning can go from one point to another.…So let's take a quick look at how we would set up a project to use multiple…track points for effects.…I am going to drag Mountain Peaks to a brand-new composition, double-click it to…open it up inside this Layer panel.…You must be at full resolution while tracking and I also prefer to be at at…