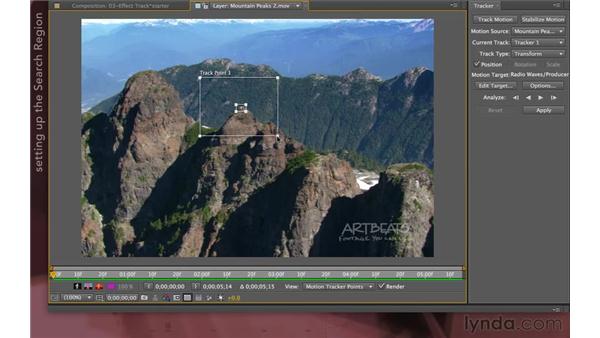 The next step is tracking one of those mountain peaks.…Now, remember, to use the Tracker, you need to be in the Layer panel for the…footage you are tracking.…So go back down here to the Timeline, double-click my footage, and open it up…inside the Layer panel.…Now, initially I'm just seeing my Radio Waves along with my dummy Producer Path…I created, but remember, you have a View pop-up in the Layer panel to determine…where in the rendering order you are seeing the results.…Right now it's showing it to me after Radio Waves.…However, if I click Track Motion, you'll notice that the view has changed to…Motion Tracker Points, which happens before the Radio Waves effect is applied.…

This way I get to track my footage without being distracted by the waves.…Just as before, I am going to drag the Current Time Indicator through the shot…and I am going to look for a peak that is in the shot for its entire duration.…I am also going to be paying attention to anything that has a good contrast and…a good sharp edge or something with well-defined features for me to track.…