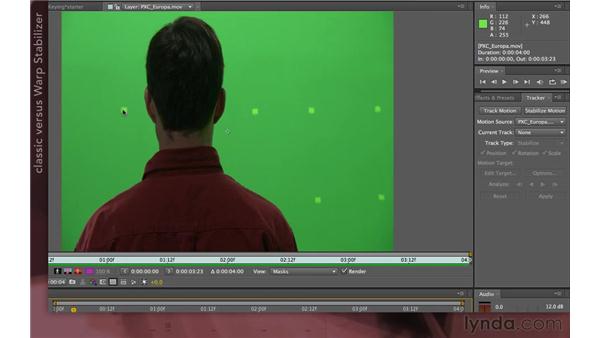 Join Chris Meyer for an in-depth discussion in this video Tracking dots, part of After Effects Apprentice: 12 Tracking and Keying.

In this chapter, we're going to take on a far more challenging stabilization and…in the next chapter, we'll show you how to do some green screen keying.…I've already done, Close All to close my previous compositions and if you have…access to the exercise files, open up 05-Keying*starter.…This, by the way, is a high definition shot, 1920x1080, work in Square Pixels,…in a common filmic Frame Rate of 23.976.…However, as a side note, if I go look at this source shot in the Project panel,…you know that its source size is 1440x1080.…

This is a common so-called anamorphic format the high-def video captures, and if…I go into the Interpret Footage dialog, you'll see that I've set this Pixel…Aspect Ratio for HDV 1080 with a ratio of 1.33 to 1.…That means this original shot needs to be stretched out horizontally an…additional 33% for to look right.…If you're new to the subject of non- square pixels, go check one of the…sidebars at the end of our fourth Apprentice course on layer control where we…give you a quick primer.…