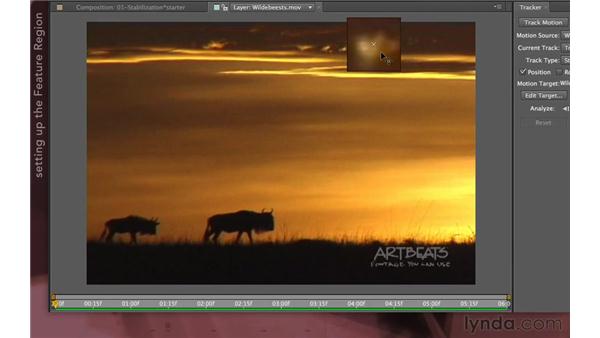 Join Chris Meyer for an in-depth discussion in this video Track points explained, part of After Effects Apprentice: 12 Tracking and Keying.

Now that I've added a Track Point to my layer, I need to find a good feature…inside this clip to track.…I am looking for a collection of pixels that have high contrast, either in…luminance values or in color, to the area around it.…Candidates include these little bright highlights up in the clouds or these…clumps of grass down here along the horizon line.…The next thing I need to do is scrub through the length of my clip that I…want to stabilize and make sure this feature I've identified stays on screen…for preferably the entire shot and that nothing obscures it, in other words,…walks in front of it.…

Because these wildebeests are walking across the horizon for the length of this…shot, those clumps of grass probably wouldn't work so well, because the…wildebeests will get in the way, and After Affects might think its leg is…actually a part of the grass.…Far better are those highlights along the top of the screen.…They are staying in the shot.…There is a chance that the clouds are drifting slowly during the shot and I…