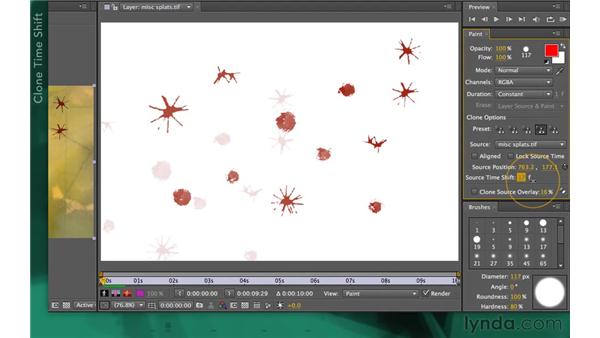 In this movie, I'll cover some of the options for shifting time.…I already have one of my Clone strokes animating, and that's Clone Stroke 1.…I will remove Clone 2 and the Eraser stroke just to simplify matters.…If you don't have a Clone stroke that's animating, make sure your source is a…movie or an animated element.…I will start by selecting the Clone Stamp tool, and just so we can save our…other presets, I will move ahead to preset number 4.…

Notice that I can Option+click on the animated element and I can clone it elsewhere.…Now as I scrub the timeline, both the elements animate in exactly the same way.…So yes, you can clone the clone.…Now you might not like the fact that the clone strokes are in sync, so…let's look at Clone 2.…We will twirl down Stroke Options and we will look at the option for Clone Time Shift.…This allows me to shift the time so it's not showing me exactly the same image.…

Let's try another option.…Notice that Clone 2 is selected.…I will press F2 to deselect.…If I leave it selected, when I go to clone another stroke, I will replace this…