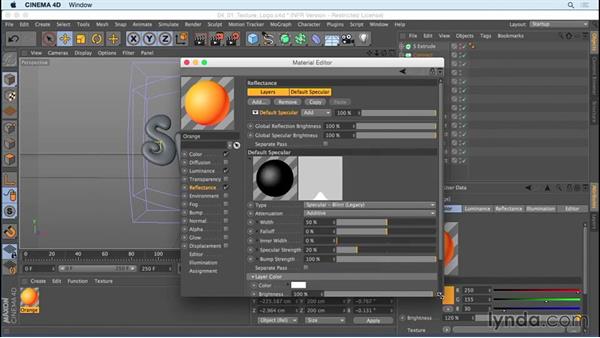 - With our Sproing logo all animated,…it's time to apply a fun, cartoonish material…to the letters to give it some pop,…as well as adding a complementary background color.…So we're gonna apply a nice, bright orange material…to our text.…Let's go ahead and double-click in the material manager,…and we'll just rename this Orange,…and double-click to open up the Material Editor,…and let's start making some materials.…So let's go and get a nice orange color.…Let's give it a value of 250 in the R,…155 in the G, and for the B we'll give it 30,…so we got a nice, bright orange color,…and let's just bring up the Brightness a little bit,…to about 120.…

Next let's go ahead and check on Luminance,…so we can give this some luminant brightness…to assure our logo is nice and bright,…and doesn't have too many dark areas.…So we're gonna apply a bright orange color to this as well.…Give it a value of 240 for R,…G we'll give it a value of 50,…and for B we'll give it zero.…So we've got this nice, bright orange color here.…So we're gonna add a little bit of Fresnel to the text…