Teaching a puppet to write 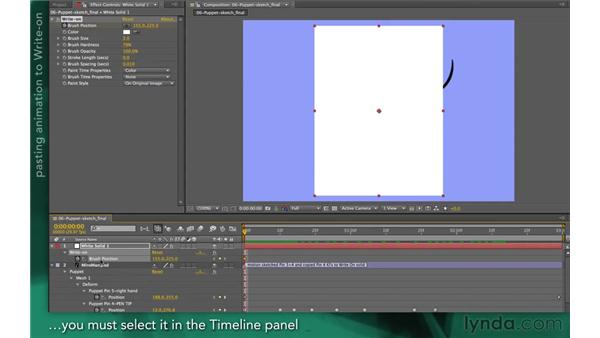 Quite often, the Comps_finished folders supplied with our Exercise Files…contains versions of these comps that go a little bit further than it was…covered in the book or in these movies.…For example, I will open up 06-Puppet-sketch _final and I will play back a RAM preview.…In this case, not only are we animating the pencil or pen that our MiroMan is…holding, it is drawing on characters to reflect the path that it drew.…Let's see how we did that.…I am going to turn off this effect for now and recreate it.…

That effect is on something called the Write On solid.…I will turn off its visibility.…Now you may remember from an earlier movie in this lesson that you can motion…sketch any of your Puppet Pins.…I will select Puppet for the MiroMan, temporarily select the Puppet Pin tool,…hold down Command on Mac, Ctrl on Windows and position my cursor over one of the…pins until this little stopwatch appears.…That indicates that now I can motion sketch and After Effects will capture my…movements in real-time.…

Video: Teaching a puppet to write