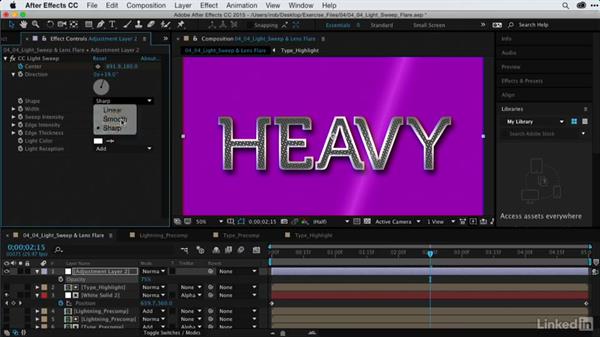 - Since we all understand that the term "tasteful" is totally subjective, in this video, we're going to add CC light sweep and lens flare to our project to create a little bit more depth. The key to making it tasteful is by really making the effect a little more subtle. So if we look at our project and scrub in the timeline here, you can see I've got my heavy 2D kind of metallic type with this highlight animating over top of it. But there are many more layers in this project, and we may turn those layers off and on, depending upon what we need, but for right now, I can just leave everything set up the way it is, because I want to focus on what we can do with a light sweep effect and lens flare.

So right now, this highlight isn't very dynamic. It's just kind of moving over top of the type. There really isn't much glow on it. or anything like that. But I do want to accentuate that highlight moving, and I want to blend it in with the background. Now I could try and source the original solid that I used for this glow, but I have a much prettier glow that we can create. So let me go up under layer and choose new adjustment layer. With this adjustment layer, let's make sure it's at the top of the layer hierarchy, and then we'll go up under the effect panel, and then we can go to generate, and let's choose light sweep.

Notice we immediately have a beautiful ray that's kind of gone right across my type. And so, all we need to do is just change the direction, like so, and if I want this to line up perfectly with my solid, I can click on my solid here, and press "p" and I could go back to my adjustment layer and tie the center point of this to follow the position data of my white solid, but I don't want to do that. I want to have a little bit more control so this sort of floats along in the background.

So what I'll do is just move my current time indicator back here, and I can see the edges of that layer, and so I'll just move the center point of my glow back here a little bit, then I'll hold shift as I scrub so I can kind of line this up like so, and I'll add key frame for that center point. And then we'll just come down here to the end, and we'll do the same thing. I'll hold down shift as I drag so it moves kind of quickly, and then I want to make sure this goes all the way off the side. And so here you can see I've got this highlight, and it's not lining up perfectly, but that actually gives it an added sense of depth because there's kind of an offset between the appearance of this line and the depth as to where we think this metallic heavy type is.

So this is kind of blending in the background. It looks good. I want to go ahead and adjust the opacity, so I'll select layer one and press "t" and bring the opacity down. I can change the style of this. So if we go to the shape, we can make it smooth instead of sharp. But honestly I like that sharp look. And then here I can increase the width just a little bit, so we'll bump it up, well actually, a lotta bit. We'll bump it up to like 134, so now as it's moving, it's created a much more interesting look to this.

And of course we could continue kind of going through the settings, but I think you get the general idea as to how light sweep works. If I really want to match this up, I could use this as the source underneath layer two here and literally match up the glow, but I sort of like what I've created here. So I'll select layer one, press return, and I'll call this sweep, just so it's labelled. Okay, now let's add a flare on top of this. And I know you're thinking, okay well, we're layering all these things, it's going to get gaudy.

Well, if you do a flare in a subtle fashion, it can look tasteful. So I'll go up under layer, and I'll choose new adjustment layer. And I'll go up under effect, and I want to generate a lens flare. So there's my flare. And I'll go ahead and have this angle off to the side, like so, and let's see, I want the center to be kind of up to the left, like that. And let's move our current time indicator back to frame zero.

And rather than using this specific kind of flare, let's click on the pull down and change it to like a 35mm prime. That's a little less distracting. I'll bring up the flare center so the edge of that circle kind of goes off the edge of my screen. So really all we're seeing are these little highlights and just a little bit of dimension across here. So we'll add a key frame for flare center, and I can go ahead and move that across. And let's hold down shift as we drag on the x. We'll bring that across here, and let's have this go quite a bit further, like so.

And so this way, as it's actually moving, I've added a little bit of depth into the scene, and it's kind of going opposite, down here, my flare. And I think that looks sort of good, but I'll blend this back. And instead of using blend with original, I'll just go to my adjustment layer and press "t" and I'll decrease the opacity just a little bit. So now it's at about 50%. And so here we've added just a little subtle flare, and we've added this little tasteful background in here.

So we've created a sense of dimension for our type, and we didn't go completely overboard. We just used lens flare and light sweep. If we really wanted to make this super heavy metal, we could go ahead and enable our lightning different layers, and now we've got a light sweep, and some heavy metal lightning, all right? So, lens flare and light sweep. So the next time you want to give your graphics a little punch, consider adding these effects.

And like I've said before, remember, sometimes, less is more.