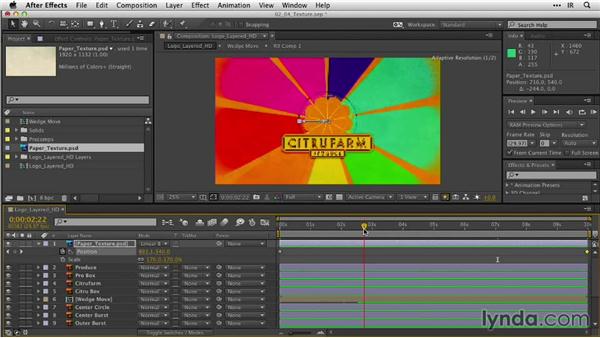 Join Ian Robinson for an in-depth discussion in this video Stylizing with texture, part of After Effects Guru: Animating Logos.

As an artist, I think we all can agree that it's imperfections that make things interesting. After all, some of my most interesting friends are far from perfect. Now, that's a story for another time. But, in all seriousness, it's the imperfections in a texture that are really going to add that extra level of detail to take your animations from interesting to really nice. Let's check it out. So if we scrub through our animation, you'll see we've got our wedges kind of moving through.

And they pop into the scene, but it's relatively flat, and we're on a black background, and that's kind of boring. So let's start by adding some color into the background. I'm going to select my Background layer here, and just go up under the Layer menu, and choose New > Solid. And, if you don't already have orange selected, grab the color dropper, and just click in the orange area of any one of the petals to create your orange solid. Now let's go ahead and move that layer all the way down to the bottom of our layer hierarchy.

Now this is a good start, but I want to smooth out the edges of these color bursts. So I'm going to select this Layer 10 layer, turn the visibility off and on, just to make sure we have the right layer selected. Let's rename this color wedge. Alright. Now, to make this blend a little bit more, I'm going to go up under my effects, and I want to generate an effect. I want to generate the light burst 2.5 effect. This is going to create kind of a neat look at the edges of my logo.

Now just so we can see things more clearly, I'll make my canvas a little bit larger here. Now to make this a little more interesting. I'll toggle my switches and modes and change my blend mode from normal to linear light. And then just to blend this a little bit more, I'm going to to change the opacity by pressing T, to open up the opacity. And I'll bring it down to about 70%. This is definitely helping it blend a little bit more. Now, to add a little more interest to animation, let's offset the beginning of this layer to start a few frames down the time line. Let's say about four frames down.

So now, when we scroll up through you can see we have the wedges of our shapes popping out and then the colors are just slightly offset, but this is going to add a little bit more interest. Now, to add more texture into the scene, I want to import a new layer. So I'm going to go to my Project panel here, and just collapse any folders you may have open, and just double click in the empty space at the bottom. I want you to import the paper texture.psd file in your graphic elements. When I click Open, you can go ahead and choose the Merged Layer.

Now, for this paper texture, let's go ahead and click and drag this right down to the top of my layer hierarchy. In here, I want to go ahead and press S to open up the scale of this layer. We can scale it up to around 170%. Since it's kind of a soft texture anyway, this is going to look perfectly fine. Now to blend this, let's change the blend mode from Normal to Linear Burn. Now with Linear Burn set up, I can go ahead and animate this texture a little bit. So, let's move back to the beginning of the composition, and press Option on the Mac or Alt on Windows and P to set a position key frame.

Then we'll just move to the end of the composition, and just click and drag in your canvas and hold Shift after you start to drag. That'll make sure that it snaps on the x-axis. Now, you can see I've got this kind of cool animation moving through my logo. Now we've got the animation in kind of going well, but we need to actually animate things out. So once the burst actually sets, let's go ahead and have this scale back down to resolve to our finish logo.

So, move your current time indicator to about frame 219 and at frame 219, let's go ahead and select our color wedge layer here, and press Option+S to add a key frame to the scale parameter. Now, let's move ten frames down the timeline by clicking in the time and then typing plus 10. Now, we can change the scale down to zero. And then trim the outpoint of that layer by holding Option and the right bracket key. Now, you can see we've got our colors bursting into the scene and then they scale down.

Then this looks pretty interesting but when the logo resolves, if we zoom in here at a 100%, I don't want this texture moving over top of the logo. So what I want to do is actually fade the different textures at different points in the layer hierarchy. So let's select layer 11 and press O to move to its outpoint. And with layer one selected, let's go up under Edit menu and choose Split Layer. Now with our split layer, let's click on layer one, move it down to the bottom of the layer hierarchy so it's just below the outline layer.

Now our logo's going to pop. And in order to fade from one to the other, I'm going to click on the start point of this layer and hold down Shift as I drag to the left and it'll kind of snap to my left key frame here. Now I can press Option+T to set an opacity key frame and press I to move to the endpoint of that layer and change that down to zero. So now it's going to fade from one to the other. But you notice, we have a pop on our top layer so, of course, we need to add a fade.

So I'm going to move to my first key frame on layer 11 here, and press Option+T with layer one selected to set an opacity key frame. And I just want to bring this down because I do think that's a little harsh. We can set it down to around 68%. And when I press O, I can move to the outpoint and then bring this value down to 0. So now when we scrub through, you can see we've got a lot more interest in the scene. And then as the colors fade, so do the textures revealing our nice popping logo on this kind of cool, funky, dirty background.

Now, to add the final coup de gras and sort of frame this out a little bit, I want to add a little texture to my background orange solid. So I'm going to select layer 15 and go up under the Effect menu and here I want to generate a Gradient Ramp. So if we click on Gradient Ramp, I'll choose my start color by clicking the Eyedropper and choose our orange color. And, I want my end color to start with that orange so I'm going to click on that Eyedropper and sample the orange.

But I want it to become a little more red. So once we have the orange selected, then I can go ahead and just bring it down to be a little bit more red. Now, I don't like this going from top to bottom. So, let's change our ramp shape to a radial ramp and make sure the start of the ramp is at the center of the comp, which I know is a value of 960 by 540, because 540 is half of 1080. And at the end of the color ramp, we want to just click and click outside of that layer. So now we have a nice, soft, subtle gradient happening from one color to another.

Now we can blend this a little bit in with the background just by blending it in to a value of about 20%. Now, in a matter of a few clicks, we've gone through and added a lot of added texture to our animation. And a lot of interest using some different effects, like the gradient ramp or even my light ray burst.

11/12/2013
This episode of After Effects Guru combines the powers of Adobe Photoshop, After Effects, and Illustrator to help you make polished logo animations for your clients. Learn how to use the Keyframe Assistant to build animations with multiple repeating elements, and animate with color, starting with grayscale values you'll use to generate different hues. Ian Robinson also provides some project-saving advice for what happens when you don't have access to the full-res version of a logo. Last, you'll learn about the best formats for outputting animated logo bugs and animations that contain transparency.