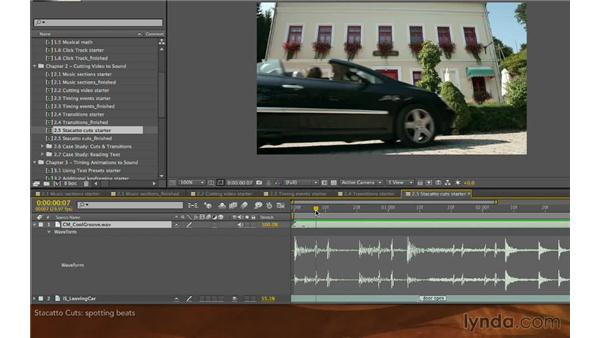 For the remainder of this chapter, I'm going to talk you through some ideas rather than work through exercises, and give you some more things to think about when you're cutting visual to music. I'm going to open up this 2.5 Staccato Cuts Starter. As I mentioned quite often music, falls into divisions of sub-beats, and sometimes it's fun to hit these smaller shorter sub-beats with quick changes in the visuals rather than work on entire sections of music for when our changes happen. I'm going to preview this clip in music, and you'll see that I've already started cutting, one piece of video to go for this whole opening.

I'll jump ahead for when this preview's done. (MUSIC) And you see, I've already played some games with the one clip we have. I've timed that door close to match this last beat in music and I've timed this door open to match pretty much when that saxophone starts squealing.

So the action of opening the door mimics the action of that saxophone note calling out. I've done this by doing a speed change, or a time stretch in after effects parlance. To go ahead and make that clip match, but having just one clip of video for this entire piece of music is a bit boring. Maybe I want to do some establishing shots of these four actresses as part of this drum roll at the very beginning. (MUSIC) So let's go ahead and mark out those individual beats, and you don't have to follow along. You have a good idea how to spot beats by now, but you can if you like. So, obviously, I have one beat there.

(NOISE) I can see a spike in the wave form here, which is probably another beat. And when one frame straddles a beat, I tend to go before. (NOISE) So I'll mark that beat. Oh, you see I didn't have my layer selected, so instead of getting a layer marker I got a comp marker. That's not what I wanted. Cmd or Ctrl+Click, cut that marker, select my layer, then press asterisk to place my marker. Again, we're kind of straddling. I like to anticipate so I'll go ahead and make that mark and mark that beat. So there's our first four beats there.

Dah, dah, dah, dah. (MUSIC) And that's going to mark the next four beats. Beat, beat. (MUSIC) Yup. Beat, beat, and what's this. (MUSIC) That's the last hit before sax. So I might use these for beats to go ahead and bring on four vignettes on my actresses. Then use those four beats to go ahead and take those four vignettes back off and then get back to my nicely timed main shot of the door open and the action taking place in time with the rest of the music.

And rather than go through all that cutting, which is a bit tedious, I've provided inside of the exercise files a finished version of this. Where I'm bringing on little vignettes of four actresses, doesn't happen to be the same four in the car. I'm just going ahead and using stock footage. Then I'm cutting to the actual car shot. So let's go ahead and preview that.

(MUSIC) So that just gives you a quick idea of how you might use smaller beats in the music, to go ahead and do fast cuts, or fast effects in the video. I could've had this establishing shot, on by the way for the entire intro, but I personally find that covering up, and revealing again was visually confusing. (MUSIC) So instead I used a different background shot for my build, and then to remove those videos and then on this strong beat then I cut to my main video it carries me throughout the rest of my show opening.

This is just another idea I wanted to throw in while we're cutting video to audio. On the next movie, I want to show you where I use several of these ideas, staccato cuts, cutting in time changes of the music, crossfaded transitions that match the music, and put it all together for a little PSA that I did.