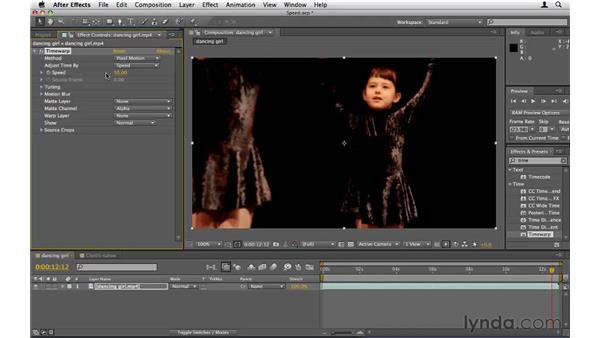 Join Chad Perkins for an in-depth discussion in this video Slowing and accelerating video speed, part of After Effects CS5 Essential Training.

One of things that we After Effects users do on quite a regular basis is to play around with the speed of clips. We slow them down, or speed them up. So, I want to show you a little bit about how to do that here. We have two different clips that we're going to be looking at. The first one is this dancing girl clip. This is actually my little daughter Natalie. And the footage is blurry, but still adorable nonetheless. And she is dancing around here, having a good time to Frosty the Snowman. And so what I am going to do is go over here to the column in the Timeline panel, maybe next where it says, Parent, or one of mode switches areas, whatever.

Right-click on this bar, and then go to Columns. These are different columns that we can access here, just like Parent is a Column, and layer Name is a Column. We'll go to Columns, and choose Stretch. This allows us to control the stretch of the clip. So, if we took this down, it stretches to maybe only, like 50% of the clip. Then it's basically making this 50% of the duration. So, by making it 50% of the duration, it has to speed it up. So, if we now hit the Spacebar to preview this, we can see, and actually, it's kind of loading in to RAM, so it's not previewing in real-time.

I'll just go ahead and stop that, hit the Home key to backup, and now play this back. And there we go. It's going twice the speed. Now, but opposite is also true. We can click and drag this to the right and take this all the way up above even 100%, let's say 200% for right now. And that will make this clip twice as long. So, as we play this now, we have this very beautiful slow motion rendition of my little girl dancing. So, I'm going to go ahead and render this, and we'll see what it looks like.

Now, you'll notice how fast that rendered, very, very quickly. And you'll also notice that this is a little bit jagged. Here is why. Let me actually just play that back for you, 0 on the numeric keypad is the RAM Preview. See it's going in slow motion there. Very, very pretty. But again, you'll notice that with the RAM previews, the green bar here, that it's really staggered. Now, what's going on here when you stretch something, if I hit Page Down to go from frame-to -frame, you'll see that we have a new frame, and I hit Page Down again. I go to a duplicate frame, and then I go to a new frame.

And then the next frame is just a copy, and the next frame is a new frame. So, really what it's done, in order to stretch it to 200%, is it has duplicated every frame twice. Now this looks pretty, but it's a very like circa 1990s slow-motion, because it's a little choppy. It's not completely smooth. Again, it's copying every single frame. It's still a cute effect, but there is a better way to do this here. I am going to take that stretch, and I am just going to click in this field and click 100 in the Stretch Factor field here and click OK.

I'll take it back to our original speed. I am going to apply the Timewarp effect. And the Timewarp effect is a more intelligent way to play with time. And because it's a more intelligent way to play with time, it takes a lot longer to render. When I am talk about lot longer to render, I mean a lot longer to render. So, be aware of that. By default, the Speed value here is set to 50, which means 50% of the speed, so the numbers are kind of backwards. With the Stretch column, when we take something to 50, it means we're speeding it up, because it's only half of the duration.

But in the Timewarp effect, speed refers to the actual speed. So, 50 will actually slow it down, cut the speed in half, and 200 would be making it twice as fast. So, we're going to hit the Home key and back up here. I am going to do a RAM Preview of this. But because it take so long, we're just going to go ahead and edit this out, so you could see the final result. So, with that long render, this is what we have. So, it's just more smooth, and more fluid. If we're going to pause this here, After Effects is intelligently figuring out what comes in between the new frames.

So, if we hit Page Down, we could see that After Effects is actually synthetically creating every other frame. It's really amazing, and it creates a very, very smooth slow-motion effect. Now this is no replacement for in- camera slow motion, like when you over crank footage on your video camera. You record at a faster frame rate, so that when you bring it into the main Timeline in your system here, it's actual true slow motion. That's the best. But in a pinch, if you cannot get that, then this works quite well.

Of course, slow-motion stuff is always fantastic. If we go to the Project panel, there is this clip of me doing a little improv sappy piano. And if we play this back with the piano, it's kind of a touching effect. (Piano playing) Pretty fun. Let's go over to the Clip05, the snowboarding clip we have seen before.

Now this clip is actually already in slow motion a little bit. Again, this is the in-camera slow motion I was talking about, that when they filmed it they filmed it in slow motion. And it looks pretty good here. In this case, what I would do is I would just avoid the Timewarp effect completely, unless you were going to slow it down even more, which you could do. If you go to the Columns area, we'll go to Stretch, and we stretch this, I don't know, to maybe 50% or so. And then as you preview this back, it renders very quickly - in contrast to what we just saw with Timewarp. And it appears to almost bring this back into full speed, which is very interesting.

So, I'll preview this back and look how fastly that rendered, and I did just say fastly. Go ahead and apply the Timewarp effect to this clip. I want to show you something else. If we go back to the dancing girl, sometimes you will have occasional artifacts. There isn't artifact right there. They are just kind of like this little like thing that flies off like a little tentacle, or something that's not there in the frame before, or in the frame after, but in the process of synthetically creating these frames, sometimes After Effects will do really weird things.

There is another thing too. That's not really what her hand was doing in the clip, but that's just what happens with Timewarp. For whatever reason, this exact clip of my daughter dancing here, this is probably the worst case I've seen of it. It usually doesn't artifact that much. But just to show you that it can actually work very well, I apply the Timewarp effect. We'll take Stretch back to 100%, and then with the Speed value at 50%, we know that After Effects is actually creating every other frame from scratch. So, it's slowing down the slow-motion, and it's still just looks fantastic, every frame, after frame, after frame, even in an action shot like this, it's still just looks fantastic.

4/30/2010
In After Effects CS5 Essential Training, author Chad Perkins discusses the basic tools, effects, and need-to-know techniques in Adobe After Effects CS5, the professional standard for motion graphics, compositing, and visual effects for video. The course provides an overview of the entire workflow, from import to export, as well as detailed coverage of each stage, including animating text and artwork, adding effects to compositions, working in 3D, and rendering and compressing footage. Exercise files are included with the course.
Topics include:

A: To create a blob layer, make a shape layer using the Pen tool. Animate the anchor points over time to make it move. These concepts are reviewed in depth in Chapter 4, "Learning to Animate."

Q: In the Chapter 5 video "Understanding precomposing," the exercise file provided does not seem to match up with the file the instructor uses. My file does not include a "Biker Body" layer. Is there an error in the exercise file?

A: Unfortunately, the exercise file originally distributed for this chapter was incorrect. A new file was issued in February 2011. If you downloaded the exercise files prior to then, you can download the corrected file on the Exercise Files tab of the course page.