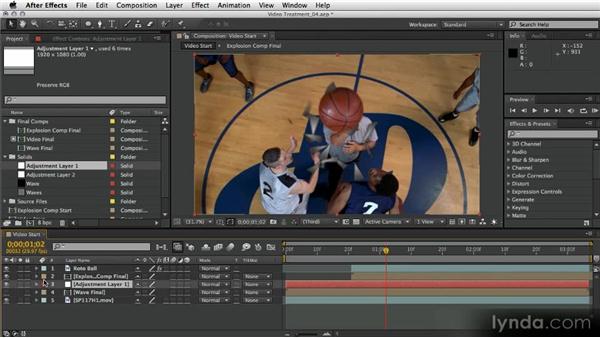 It's about time to composite all the elements that we've prepared and to create the final composition. I'm inside videotreatment_04, which you can find in the third folder of the exercise file. And in the center of this movie, we will create the simulation of a shock wave displacement effect using the Caustic Effect. But for now lets start to assemble the final video composition.

I will start by opening my Video Start Composition, which already have the water ball. And here between those two layers, we will start adding those final comps that we've created earlier. So, I'm going to open up my Final Comps folder and let's start by placing the explosion comp here. And actually, we need to time it to where we actually want it to start.

So, I'm going to drag my play head and try to find where exactly the referee is releasing the ball. I think it is over here at 21 seconds. let's just drag the explosion to begin here. You can either drag it or use the open bracket key and this will slide it to where the cursor is. Since, I want to be as effective as possible, I'm also going to trim my water ball layer using another keyboard shortcut, Alt close then Open Right Bracket.

I'm also going to set the resolution to auto, in order to speed things up while we are working. And now in order to create the, the displacement effect itself, we need to take the Wave Final Composition and just drag it underneath. Now, this composition doesn't need to be visible, it only needs to act as a source for the displacement effect. So, I'm going to turn off the eye for it, and then from this solate folder here I'm going to drag one of the adjustment layers and release it on top of this one.

Let's switch it to be an adjustment layer and let's apply the caustics effect. The caustics effect can be found under the simulation category. Here it is, so double-click in order to apply it. Now, just to let you know, the caustics effect actually renders water. This is what it does. But I really like to use it as a displacement effect, because I think that it is generating a very nice result.

However, we don't need to use the pattern or the sky here, so basically we can collapse both of them down and only concentrate here on the water section. The water surface for the displacement will be of course the wave final layer that we've just created. We also don't want these blue cast to be visible. So, I'm going to change the surface opacity all the way down to zero, and then let's just play with the wave height.

Of course, let's just place our cursor here, so we can see actually what we're doing. And I think, that I want to lower it quite dramatically, so it won't have this severe effect, so maybe 0.04. Now, I'm also going to raise the smoothing, so we will get a better result. I think that ten is a good number. Now, I also want to dismiss the inner lighting of the effect. The easiest way to do it is to open up the Lighting section and just change the Light Type from Distant Source to Point Source.

And that will have a very gentle, but visible effect. I'm going to go to the beginning of the composition and press zero to create a grand preview, so you can see the intermediate result. Now, although this is a very subtle effect, I do think that it adds a lot of power and definition and it does look very impressive, giving the impression that there is some kind of a shock wave to the video making this very lively and powerful.