Setting up the project in After Effects 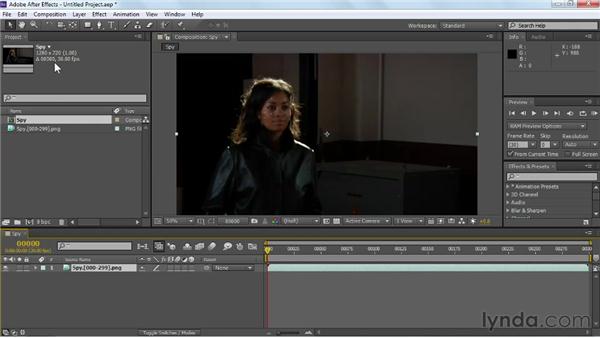 We're now ready to set up our project, bring in our first piece of footage, and create our first composition. I am going to go to File > Import File, and grab our first image sequence. Even though it says File, I could bring in the image sequence as a single unit. First piece I will bring in is called Spy. So, I'm going to go to the Footage folder, the Spy folder, and click on the very first Spy frame, which is 000.png. When I do that, I can see that the PNG sequence is checked down here at the bottom-left. I do want that to be checked.

What that means is even though I've selected only one frame, I'll bring all those numbered frames in as a single unit. So, assuming this is checked, I can go to Open and click that. And there is the image sequence. It's 300 frames long, but it's brought in as a single unit right here in the Project Panel. If it's highlighted, I can see the resolution, the duration, and the frame rate. Now, the duration looks a little funny. That's actually time-code where you have numbers with colons, and this is a video type of reading out the duration.

It would be better to work with frames, which is more suited for visual effects. So, I'm going to go up to File>Project Settings. At the top of this window, there is a Time Display Style option. It says Timecode, but I really want Frames. So, I'll click Frames, and then click OK. When I do that, duration is read out in frames, which is easier to imagine for visual effects. Now, we need our first composition. A quick way to make a composition is to simply click+drag the image sequence down into the Timeline, which was empty.

When I let go, the footage appears down here, a new composition is created, and that's called Spy. Now, what's great about this technique is the new composition has the same exact resolution, the same exact duration, and the same exact frame rate. I'm going to go back to the footage. I do want to mention something about the frame rate. Now, the video was originally shot at 30 frames per second, so this is good, it matches. However, occasionally, you might bring in footage that doesn't match or just has a wrong frame rate interpreted right here. What you can do is go down to the footage, right-mouse click while it's selected, and go to Interpret Footage > Main.

In this window, there is an Assume This Frame Rate cell. Now, in our case, it's correct with 30. But, if you needed to change it, you could change the frame rate right here. For example, if you're working with 24 frames per second footage, you can enter 24 right here. Now, we're good to go. So, I can just cancel out of this window. Let's take a look at this footage, and see what's going on. I'm going to use the RAM Preview button at the far right, click that. The first time it plays through, it's going to write to disk.

So, it's a little bit slow. As soon as it reaches the end, however, it will start playing in real-time. It's now in real-time. This sequence features an actress who walks towards camera, touches her face. There are little white tracking marks on her face, which we'll use later for motion-tracking. Eventually, we'll place new objects on her face to have them follow her face motion. One will be a little tattoo, like electronic tattoo, right here on the side.

Another will be a heads-up display, a futuristic display. The idea is she's some kind of industrial spy, and she's using this technology to see what's going on in the room. Well now we have our basic project, we have our first image sequence imported, we have a composition, and we've taken a look at it. We can now address the tracking marks on her face and create some digital makeup to hide those.

1/28/2013
VFX Techniques introduces common yet critical visual effects techniques that are used in film and television shows on a regular basis. This installment shows how to build complex composites with Adobe After Effects and mocha, where motion graphics are mapped to live-action footage of an actor. Author Lee Lanier starts by combining rotoscoping and effects to digitally apply makeup to an actor to disguise motion tracking marks. Then discover how to transfer footage into mocha and generate planar tracking data that you can use to motion track graphics to the moving face of the actor. Plus, learn how to build and adjust motion graphics to create the look of a virtual tattoo and a pair of holographic heads-up glasses.
Topics include:

Video: Setting up the project in After Effects