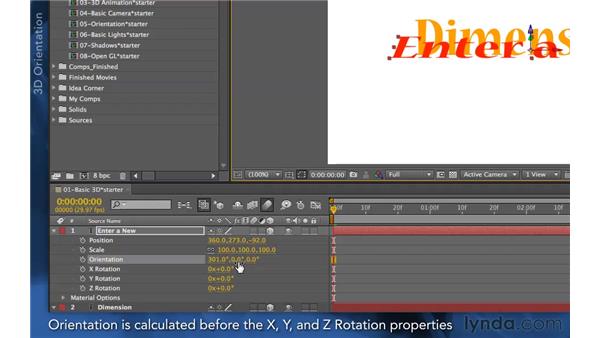 Join Chris Meyer for an in-depth discussion in this video Rotation in 3D, part of After Effects Apprentice: 11 3D Space.

Now let's discuss the issue of Rotation and Orientation for 3D layers.…I'm going to start off by dragging my Enter a New layer down a little bit, in…clear white space, so it is easier to see what's going on.…Just as in 2D, you can edit Rotation interactively in the Comp panel or by…scrubbing down in the Timeline panel.…Let's start down here.…You'll see separate X, Y, and Z Rotation parameters, each with their own…animation stopwatch.…Z Rotation is what you have with normal 2D layers.…

Another cool thing about this is, if it overlaps another layer that's fairly…closely spaced in Z Position, as I rotate one layer, it will start to intersect…