Review of the image sequences 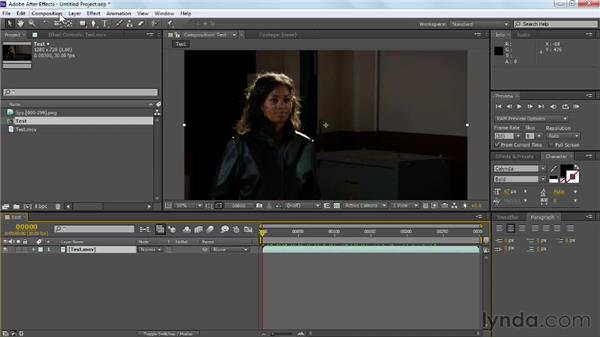 Image sequences are used throughout this course. They're different from movies, so I wanted to discuss them. For example, if we go to the Exercise Files folder and into the Footage folder, there are several other folders full of image sequences. I'll go to Spy. What you see is a series of images numbered, in this case, from 000 up to 299. Each frame is a separate image. These are often used in the visual effects industry. They have certain advantages. For example, they're progressive. Each frame is whole by itself.

There's no potential for interlacing like you might have on video. In addition, they're very easy to manage. If you need to re-render something, you don't have to worry about rendering the entire movie like QuickTime, you can re-render just a few frames. Now if you're working with video, you can create your own image sequence from that video. I'm going to show you that. Let's go into After Effects. Here's After Effects. And just as example, I have one image sequence already loaded into the program. Great thing about After Effects, it can bring in an entire image sequence, in this case, with 300 separate frames as a single unit.

But we'll discuss how to import these, and how to use them throughout the course. Right now, let's go ahead and bring in a movie. File > Import File. As an example, I have QuickTime prepared on my desktop. You can use your own movie as a test. What I can do then is pull this movie down into the timeline. When I do that, it creates a new composition in its correct size, duration, and frame rate. I can just scrub to this.

Take a look at it very quickly. Now again, this is a movie, it's self-contained, it's not loose-frames. It's a single file. If I want to return this into an image sequence, however, I can do that through the Render Queue. With this layer selected and this composition active, I can go up to Composition > Add to Render Queue. That brings you to the Render Queue tab. There are two things I need to change before I can render, the Output Module, and the Output To. I am going to click on the word Lossless first.

That brings up the Output Module Settings window. At the very top is the format you're rendering to. You can't render to another movie format or render a sequence. I need these options that say Sequence or Produce the Image Sequence. For example, I can render a PNG Sequence. Once I have that selected, I can click OK to close the window. Now, I need to change my Output To. This is where I choose a name and the location for the files I'm going to write out. I'm going to create a temporary folder on my desktop, New folder, Test.

I can enter that folder, and then pick a name. Now the way it works is, you have a name, then brackets, pound signs, another dot, and then the extension. I want to name mine 'Test.' but I want to leave the brackets and the pound signs. Those pound signs represent numeric placeholders. So, in order to have the first frame named 000, I need three pound signs. This will work if I render all the way up to 999. So, in any case, my name is set right now and click Save.

Once I have the output module set and also Output To, I can go ahead and render. And this will convert the movie into a whole series of still images. Once the render finishes, the yellow bar goes away, and you'll hear a chime. Now, if your movie is fairly long, this might take quite some time. Once it's finished, though, you'll have a folder full of image sequences. I can view those on the desktop. There is the folder. And here are all the image sequences numbered 000 all the way to 299.

So if you only have movies, no image sequence, you can create your own.

1/28/2013
VFX Techniques introduces common yet critical visual effects techniques that are used in film and television shows on a regular basis. This installment shows how to build complex composites with Adobe After Effects and mocha, where motion graphics are mapped to live-action footage of an actor. Author Lee Lanier starts by combining rotoscoping and effects to digitally apply makeup to an actor to disguise motion tracking marks. Then discover how to transfer footage into mocha and generate planar tracking data that you can use to motion track graphics to the moving face of the actor. Plus, learn how to build and adjust motion graphics to create the look of a virtual tattoo and a pair of holographic heads-up glasses.
Topics include:

Video: Review of the image sequences