Repairing the layers in Photoshop 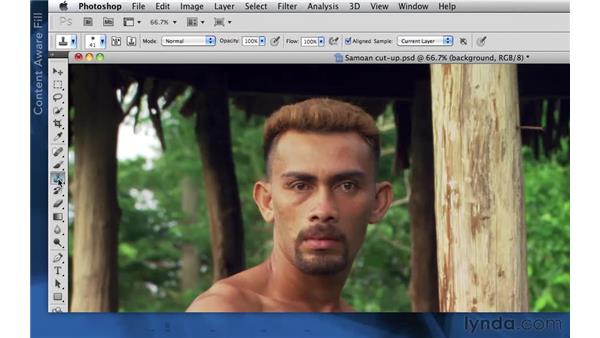 Join Chris Meyer for an in-depth discussion in this video Repairing the layers in Photoshop, part of After Effects Apprentice: 11 3D Space.

Once I'm done cutting it up, I will now switch to Photoshop, import that file,…open Samoan cut-up.psd, Open and now you'll see I've these individual layers for…the full frame background and the pot, wall and a little bit of that fan, the…left pole, the right pole and the man.…Now since nothing was obscuring the man, the foreground pole or the pole in the…left, I don't need to do any further touch up work in any of these layers, they…are fine as they are.…

However, I do have bits of obscured for this pot, wall and fan, and then there…is the background, it's going to need the most work.…What I need to do is remove these objects, such as this pole, this pot, pole on…the left and most importantly this man so that I've a clean plate that only…represents everything that's behind those individual layers.…That's going to be the most labor- intensive part of this whole process.…Again, I'm not going to go through all of the steps here, but I want to give you…a few ideas at how you might go about it.…

First, I'm going to turn off these guides, since I don't need to see them for this work.…

Video: Repairing the layers in Photoshop