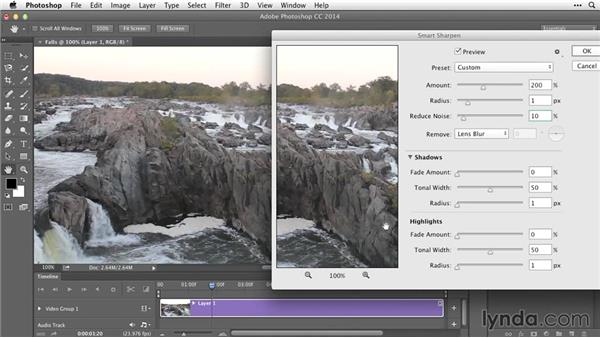 Join Ian Robinson for an in-depth discussion in this video Refining video with Smart Sharpen and blur reduction, part of After Effects Guru: Working with Photoshop Files.

…There's nothing worse than shooting a piece of video only to…realize that it's just a little bit soft.…I'm not talking about out of focus,…I'm just saying in general, the shot is a little soft.…This can sometimes happen based on the codec that was used when the footage…was shot.…If your camera has no control over that, then,…you know, maybe you just need to sharpen it up just because.…No matter your reason, there are several ways to sharpen your video inside of…Photoshop, so let's get started.…Once your inside of Photoshop, go open our file and choose Open.…

I want you to navigate the assets folder, in there we have a file called Falls.…Go ahead and open that file.…And, if you look at the video footage, it looks relatively okay.…I'm actually going to change its magnification up to 100%.…And once it's up at 100%, we can go ahead and…play back the video and we can see, it looks fine.…I mean, it is loading a preview right now,…so you are getting some chunkiness in the playback.…When you stop playback,…you'll get the actual hi-res version of what it is we're looking at.…