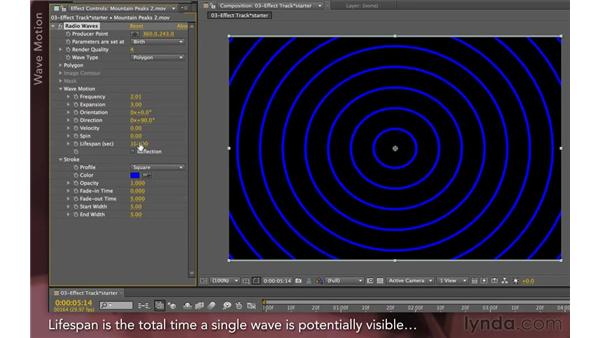 Join Chris Meyer for an in-depth discussion in this video The Radio Waves effect, part of After Effects Apprentice: 12 Tracking and Keying.

In this next set of movies rather than have one layer track a feature of a…piece of footage, we are going to have an effect track a feature and an…underlying piece of footage.…If you have access to the Project Files go to the Comps folder and open up…03-Effect Track*starter.…Go ahead and drag the Current Time Indicator through this footage to…become familiar with it.…It's a helicopter fly by a series of peaks along the top of this mountain.…Let's say we want to pretend that some radio signals were emanating from one of these peaks.…Well, to do that there is an effect called Radio Waves.…

Go ahead and select that and drag it onto your footage.…Now, initially it seems like nothing happens, everything went away, but if you…RAM Preview, you'll see that Radio Waves emanates a series of concentric…circles over your footage.…I'll Stop, press End to go to the very end of this footage so I can study what…Radio Waves is doing over time.…The first section we're going to study is Wave Motion.…That determines how the waves propagate out from their central Producer Point.…