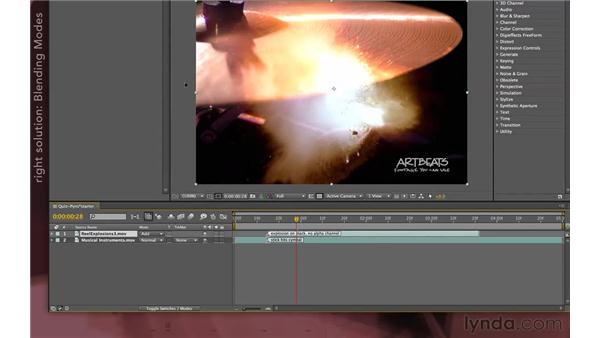 Our first Quizzler challenge is how to make a nice composite out of this simple background footage in this pyrotechnic foreground footage? Just to prove that this pyro has no Alpha channel, I'm going to solo it and use Transparency Grid. And you see, no alpha. Solid black layer. I'll turn off Solo. Now if you come from a video editing background, you maybe tempted to look for Effect > Keying > Luma Key. This is a way a lot of editors try to key out black.

I'll apply it, start to determine the threshold, and start to eat away the black until I can see the symbol underneath. Let me tell you, this is not the preferred solution. No matter how much you tweak Tolerance, Edge Thin, and Edge Feather, you're going to end up with a black fringe and basically unsatisfactory details around the edge of this object. So don't use Luma Keyl instead use blending modes. I'm going to Toggle Switches/Modes, bring up my Mode panel, and then for the explosion on top I'm going to choose a mode that inherently brightens the composite.

When you choose something like Add, or Screen, or Color Dodge, anything that's black in the layer on top will have no effect on the composite and any pixels brighter than black will add to the layer underneath. I'll start with Add mode and that is result that I wanted. The black of the explosion is dropped off completely. No Alpha channel has been created. It's basically not adding any color values to the footage underneath. Then the color values of the rest of the explosion are added to the symbol footage.

And you can try other modes. Screen has a less severe look, Color Dodge tends to have a more interesting colorize look, but I'll go with Add. Now there is one other small problem here is that explosion is not lined up with where the stick is hitting the symbol. So to change that, I just need to pick up that footage and move it so that it does align. Of course now I have a problem that I don't have enough footage to cover the entire shot. My anchor point already exists at the center of the explosion. That's great.

I'll just press S for Scale and scale it up until I see that it's going to cover my entire frame. Now the layer is outside the layer boundary of this composition. Normally, it's a bad idea to scale this up pass 100% . That's why it's good to have a store of high-def footage around, but in a composite like this, you can get away with it. I'll RAM preview and there you go. The main point is don't always reach through things like keying effects when you need to composite layers. Blending modes is often one of your best tools to create composites, be it for motion graphics or for visual effects.