Prepping text to be animated with the Jiggle deformer 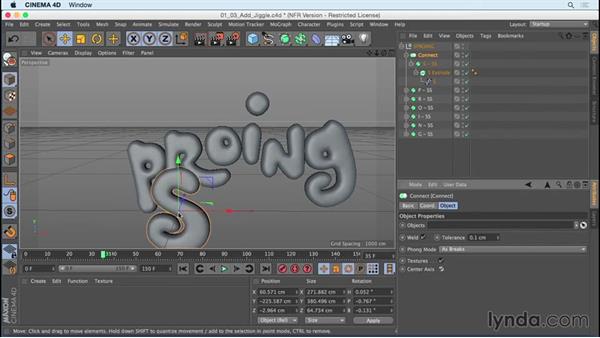 - In this movie we're gonna prepare our text for animation. We're gonna use a really fun deformer, the Jiggle deformer, to apply our cartoonish, bouncy, squash and stretch movement to our text. You can see in this example if we make a Jiggle deformer a child of an object let me just turn this on, you can see that it applies this nice bouncy movement all across our objects. It almost works like a Delay effector would affect clones if you set the Delay effector to Spring.

So the real fun happens when you actually enable a Falloff in this Jiggle deformer. We're gonna go to Falloff and set the Falloff from Infinite to Linear. You can see that based off the Falloff direction, we now have this kind of squash and stretch animation applied instead of just a Jiggle movement applied all across the object evenly. We can change the orientation to +Y, and you can see that we now have a different type of squash and stretch animation.

We actually have this kind of anticipation secondary animation going on, and really gives our text some more character than it would just animating across the screen by itself. So we're gonna use these Jiggle deformers along with Falloff to create most our bouncy text animation for this project. Let's jump back into our logo, and we're gonna apply Jiggle deformers to each of our letters here. Now to apply deformers like I showed you, you can either make them a child of the object, or you can apply it to any object that is in the same hierarchy level in a group.

Right now with our setup, we actually need to adjust our setup so all of these objects are connected together and form one cohesive object. Right now they're all separate 'cause they're all separate objects. The Jiggle deformer won't recognize our Subdivision Surface and Extrude Object as one cohesive piece of connected geometry, but we can solve this issue by using a Connect Object. You can find it right here. So what a Connect Object will do is basically connect all the objects together as if it were made editable that you would normally do with Primitives by hitting the C key, but this way allows you to still have your extrudes, spline, and everything else intact for further editing down the road.

I'm just gonna place my Subdivision Surface Group underneath the Connect Object, and you can see that this is gonna weld everything together and create one cohesive piece of geometry. What I'm gonna do is enable this Center Axis option and that'll actually bring our axis center to the center of our object. We'll just place that back into the correct position there. You can see we have our axis center in the center of our now-connected geometry here.

Let's go ahead and at Frame 20 let's just see how this Jiggle deformer will apply to our text. So I'm just gonna set some Scale keyframes so they'll scale from 0 to 1 from Frame 0 to Frame 20. I'll just bring our project length down to about 35 and I'll hit Play. You can see that our Jiggle is applied all over our object. You can see we have this odd rippling occurring right now, and that is due to some of our settings in our Jiggle.

Let's go over some of these settings here. In the Jiggle deformer options, you see we have Strength, Stiffness, Structural, and Drag. Strength is just the overall strength of our Jiggle. Stiffness is how stiff our object is, so you can see as I lower that value, it's less stiff, it's more flopping around right there. Let's bring that back to 40. Structural controls the Jiggle deformation across the object surface. Drag is how fast the Jiggle energy stops.

Right now I need to adjust this Structural value because it's kind of rippling way too much, and just bring it down to 0. You can see now we have that Jiggle just adding that bouncing Jiggle to that Scale. Now what we can do is just go ahead and apply this Connect Object and Jiggle setup to all of our remaining letters here. Now what I'm gonna do is just go to my timeline and just delete all those Scale keyframes 'cause we don't need those anymore, and I'm just gonna turn off all of our Jiggle deformers as well.

Now if you wanted to, you could skip the whole Connect Objects setup and just make the Extrude Object editable and place the Jiggle as a child of the Subdivision Surface, but you'd lose the flexibility of being able to edit the text spline later on if you needed to change the look of your letter down the road.

Video: Prepping text to be animated with the Jiggle deformer