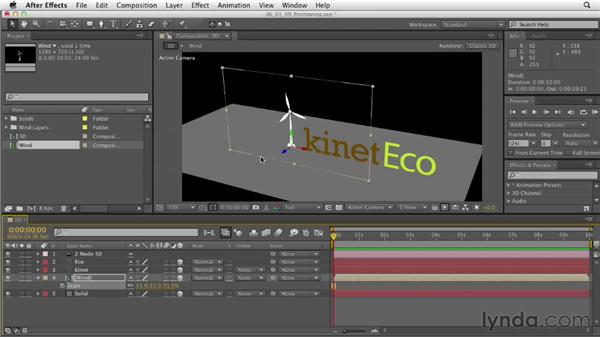 This tip I'm going to show you in this video has save me countless hours in terms of positioning and moving multiple objects around in my scenes. If you can master this, I think you'll be very excited and a lot more comfortable working in 3D within After Effects. So to get started, we need to look at the Wind composition, so double-click the Wind comp and you can see I have a propeller and a base and this is a wind turbine. Now this is an Illustrator file, but it's plenty big enough for what we need, so I'm not going to worry about collapsing Transform just yet.

Let's go ahead and close the Wind comp and add it to a 3D comp, so drag it from the Project panel just below Layer 4, the layer Solid. Now even though this appears as though it's in 3D space, we all know it's only in 2D, so enable 3D and there we go. Now it's in 3D space, but we do have an issue. If you click on the Y control axis handle and move up in the scene, you can see the anchor point of this layer is kind of not in the right place.

When you're dealing with resetting anchor points on objects in 3D space, I recommend switching to in orthogonal view, like Front. Here, I'm just going to middle mouse click there to move down. Okay let's zoom in there, perfect. When you're in an orthogonal view, you're eliminating the need to deal with three dimensions, because you can only deal in two dimensions. So in order to reposition the anchor point here, I'm going to press A while selecting layer 4 and click and drag on the Y axis to bring the object up to the anchor point.

And now we can click and drag on the X axis and as you can see we've lined up our anchor point and it looks pretty good. Now I know this is good, again because we're in the Front orthogonal view. So let's switch back to the Active Camera and zoom out. I'm just going to press the Spacebar and move down here. And now if we just click and drag on the axis control handle, we can move our windmill down towards the bottom, okay. As I'm looking at this, I'm noticing the axis handles our pointed towards the camera.

So we need to go back up to the top of our composition and make sure that this is oriented to the object. Now when I move I know the object is not going to move anywhere. Even though the base of this is rounded, I am going to just move it down, so it's kind of intersecting the canvas. I think that looks relatively okay. If we zoom back out, you can see, okay that's pretty cool in terms of height, but I do want to kind of scale it down. So select layer 4 and press S, and the reason I want to scale this down, I just want to add several more and if I kept it that large, it would just be way too dominant.

I want to add a field of these windmills over into the left corner here, and the way we'll do that is with some pretty nifty key commands. Just so the windmills kind of stick out further than our type, making sure that our axis handles are object oriented. We can click on the Z axis and move this up in our project. Now to add a second windmill, just press Command+D with layer 4 selected and we can just click and drag on the red axis handle to slide that one over.

Now this is where things get fun because after we duplicate it and slid this over, you want to go to the Parent section of the windmill. If you don't have Parent open in your timeline, just right-click anywhere in the gray area and enable Parent, okay. We want to make layer 4 the child of layer 5. So we have the original windmill and our duplicate windmill is the Child. Let's duplicate the Child by pressing Command+D and instead of just clicking with the pick whip, I want you to click the pick whip and hold down Option and then point the pick whip for layer 4 at layer 5.

When we let go, look what happens. Let's do that one more time, I'll press Command+D with layer 4 selected, hold down Option, grab the pick whip for layer 4 and point it to layer 5. Okay now we have four windmills. I could continue doing this by offsetting another one further back and then repeating the command, but we could really start compounding this effect by pre-composing. So select layer 4 and Shift+Click to select through layer 7 and go up under Layer and choose Pre-compose.

Pre-comp 1, I'll just called this Row 1 Wind and click OK. Now you notice it automatically reset everything in 2D, so go ahead and collapse transformations, so the 3D data gets passed through. Enable 3D for this layer as well because I want to duplicate this, but still move it in 3D space. So with Row 1 Wind selected, press Command+D and just move it back on the Z axis by clicking on the Z axis and moving backwards.

Now the first time you duplicate, all you need to do is make the child, the child of the original layer. It's the second time that you want to use the Option command, so duplicate layer 4 and hold down Option, grab with your pick whip and make it the child of layer 5, and sure enough it will repeat. Let's do this one more time, Command+D and Option, make it the child. Okay, perfect. Now we have a full nice field of windmills and if we press C, let's left-click and orbit around the scene and you can see I've got quite a cool thing going on here with these windmills.

I like how this is looking in 3D space, but we need to keep things moving by actually adding some semblance of dimension and we can do that by exploring material options and then eventually adding some lights and shadows.