Placing pulses under a runner's steps 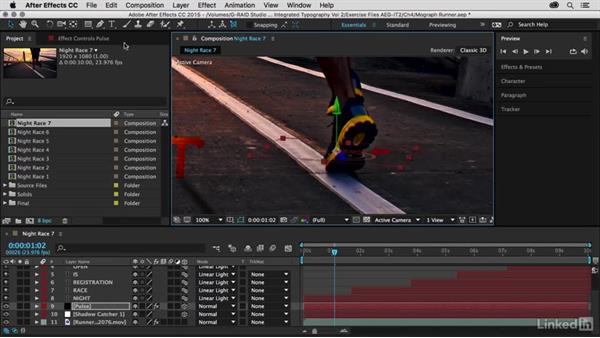 To add more energy to the action, you could create a pulse animation that will light up under something like a runner’s feet every time he touches the ground. Author Eran Stern will break it down into two steps. The first one is to create the pulse effect and then in the following movie place few copies in the correct places on the video layer.

- [Voiceover] So this is what we've created using the Radio Waves effect, this pulse in the middle of the screen and now let's match it to the scene and attach it to where it needs to be. So first off I'm going to convert this Layer to a 3D Layer and this is going to once again appear in a strange place because it is of course confirming to the camera movement that we already have in the scene. So first, just to see it a little bit more clearer I'm going to tap twice on the A key so A + A in sequence and this will show me the material options.

And in this case, I don't want this Layer to accept an Lights so I'm going to turn off the Accept Lights, here in the timeline, by clicking on it once. Now I can press R in order to show the rotation values and I'm going to take the X Orientation to 90 degrees this way it looks like it is sticking to the floor and we can see that once again it confirms to the movement of the camera. Now just because I want to be more organized I'm going to drag it down so this Pulse Layer will be before the texts.

Once again, you don't need to work like this this is just me trying to teach you how to be organized. And now we need to take this Layer and move it so it will appear as if it is creating whatever it does so this pulses just underneath the runner's leg. So I'm going to press a few times Command + plus (+) or Control + plus (+) in order to zoom into the shot and we need to make sure that it is located and placed at the correct timing.

So I think the first one is quite okay but the location is not exactly where I want it to be. Now it's kind of difficult to work like this because we changed the Orientation and now all those three axis, those red, green, and blue are pointing at the wrong way. And this is of course from my perspective. So if I want to confirm it to the view that I'm working on you can click on this icon over here to change the View Axis Mode and this will snap it back to place, meaning that now this will make more sense.

On the next movie, of course, we're going to bring the feet on top of those pulses so it looks right but for now let's just make sure that everything is going to work. I'm also going to change the label of this Pulse Layer so we can easily identify it here in the timeline so I've just chose the Cyan label for it. Now let's duplicate it and let's move it to start, I guess around one second and maybe 13 or 14 frames, so something like this.

And once again, we need to make sure that we are moving it to its place and also let's scrub the timeline to see if we've managed to create something which looks convincing. Now this is a back and forth thing so you may need to drag it and change the timing and I feel that I need to massage it a little bit more just so it feels like it's really emitting from the place that I want it to be.

So I feel that something like this is going to work and we'll need to do it at least three more times. So I think that what I'm going to do as before just so you won't be bored because this is a repetitive task I'm just going to fast forward the recording so you will see me work but in an unbelievable speed just so you'll get a sense of what I'm doing. But I don't want to bore you because this is, as you can see, a repetitive task so you just need to do this for each one of those legs.

And once this is finished we can create another run preview and if there's a need we'll continue to modify it until it would look as convincing as possible. All right, so let's zoom out and create a run preview to see what we've managed to achieve and I think it's working quite nicely. If you feel like it you can continue to move those pulses but I think they are ready for prime time, meaning that the only thing that we need to do is bring back the runner on top of it and I'll show you how to achieve it in the next movie.

Along the way, Eran demos a handful of advanced techniques, from tracking, rotoscoping, and particles to distortion and camera effects. After watching this course, you'll be able to create impressive promos, trailers, and openers that will stand out from the rest.
Topics include: