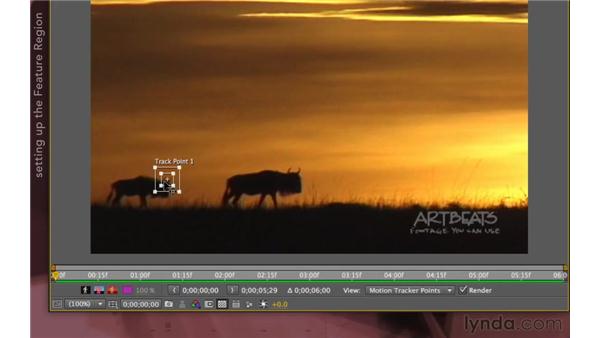 Now let's take what you have learned in the previous set of movies and apply it to having one layer track an object on another layer. Open up the Comps, 02-Tracking Objects*starter. This Comp contains three different layers; it contains the Wildebeests footage you are familiar with from the stabilization you do in the previous set of movies, in addition to a little pointer, and a little text bowl that we want to follow the head of one of the wildebeests. The initial stages of setting up a Motion Track are identical to setting up the stabilization.

If you haven't watched the prior movies, go back and watch those first before doing this, because in this movie we are just going to focus on what's different. Again, all tracking must happen in the Layer panel, so I will double-click the Wildebeests movie layer and open it up in its Layer panel. With that footage selected, this time I'll click on Track Motion rather than Stabilize Motion. After I've done so, 1 Track Point will appear and I have a few decisions to make. The first one is, what am I interested in tracking? Well, I want to put a bit of text or a thought bubble on the head of the one of these wildebeests as it goes across the shot.

In this case I'm only interested in Position, and that is all that's turned on right now. If the camera is also moving and I want to keep that perspective, I might also track the Rotation and/or the Scale, particularly if the shot was zooming in or zooming up during its duration. Both Rotation and the Scale require a second Track Point so that After Effects can determine the angle of rotation or the amount of scale; how far apart two spots are and are they growing closer together or growing further apart. But in this case, Position is fine so I am going to undo until I get back to just having my 1 Track Point for Position.

Next is deciding what to track. I am noticing that these two lead wildebeests are the ones that are visible during the length of the entire shot. And since the text I have chosen is a bit humorous, I have no idea where we're going. That implies it's not the lead wildebeest, but perhaps the following one is a bit confused, so I am going to choose this one to track. Just as before, I'll pick up my Track Points, notice I see the four-headed arrow at the bottom of my cursor. That means I am going to move all of my Track Point regions together, and place it over the head of this particular wildebeest.

I do so because it gives me some contrast between its horns and the sky behind. Now, those horns do change perspective during the course of the shot. I need to keep that in mind when I set the options, but otherwise that's a good high contrast area along his head. My other choice may be something like his nose or his jaw, but I am a bit worried about this dark grass being so close to his head, a similar feature may distract After Effects from what it's really supposed to track, so I am going to focus on these horns.

First, I am going to move the inner Feature Region to go ahead and locate those horns in a good fashion. I think I'm going to resize it slightly this way, so I have just the horns and not so much of the nose. Okay, that's pretty good! In this case, since the wildebeests are moving from left to right throughout the entire shot, I am going to bias my Search Region in that direction. Now, again, picking up and moving in one corner moves all four symmetrically. So if I want to restrict what I am moving, I am going to hold Command on Mac or Ctrl on Windows and drag on those points to say just go in that direction.

And by the way, note, again, I am starting on the very first frame of this clip so I can track him continuously as he goes across the frame. Okay. What's next? Yes, Options, I need to make sure my Options are set correctly. I'll rename this such as wildebeest horns 1. You can perform multiple tracks by the way and store them all and choose which one you like later on. Luminance, again, works, dark horns against a slightly lighter background. Don't need a Process, don't have Fields to Track, always have Subpixel on.

Now, in this case, since he is turning his head, the horns are changing from frame to frame. So I will turn on Adapt Feature On Every Frame. That will tell After Effects to go ahead and note these changes from frame to frame and to use those changes when looking to frame after this one. And as far as my Confidence is concerned, I am going to stop tracking just in case things are so bad After Effects can't follow. Okay. I have got all these set up, I'll click OK, and I will Analyze forward.

As I do so, you will see that After Effects does indeed follow him all the way across the screen, even though he was rotating his head. That's why we carefully set up our Feature in Search Region and that's why we carefully set up our Options to go ahead and adapt to changes from frame to frame. Again, I'll press U to reveal the keyframes, and even as I drag through the Time Indicator here, you can see the Confidence stays well above 90% during the whole shot, which is okay considering how much things do change in this shot. I performed my analysis. That's the time-consuming part, I have my keyframes, again, File > Save.

That way you won't lose anything you spend some time setting up.