Optimizing masks for use in After Effects 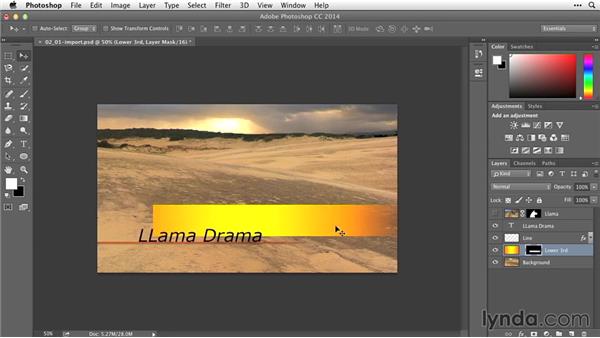 Join Ian Robinson for an in-depth discussion in this video Optimizing masks for use in After Effects, part of After Effects Guru: Working with Photoshop Files.

…Now, if you're working in Photoshop, and…you've got layer masks as a part of your normal work flow,…you may want to consider how those masks function inside of After Effects.…To show you what I mean, let's actually just jump right into the project.…So once you have your project open, it should look something like this.…If you look at the layers panel in the lower right corner,…you'll see that we have our llama layer.…And it has a mask or a matte that is being used to cut it out of it's background.…If we hold down shift and click on that mat you can see its original background.…

And then we've composited it on here.…I know he's missing the tip part of his ears, but…I think it looks relatively okay for what we're going to be doing so…I'm just going to leave it set the way it is for right now.…If we turn the visibility on the top layer off, and turn the next three layers on,…you can say I have a lower third called the Llama Drama.…Now this is an instance where you would want to have your matte be able to…

Video: Optimizing masks for use in After Effects