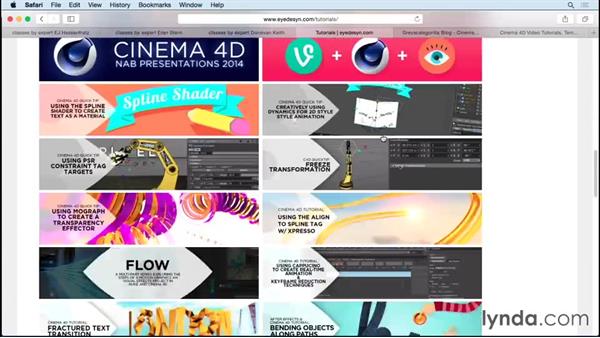 - All right, so I hope you enjoyed following along…with me in this course.…If you'd like to continue upping your MoGraph knowledge,…here are some nice resources I recommend.…So if you stay on Lynda.com,…I have a lot of other pretty nice lineup…of Lynda courses that you can see here.…I cover everything from MoGraph effectors,…rigging robot arms.…I have some courses on movie trailer titles,…and creating a sports bumper.…You can also stay on Lynda.com,…and check out some other Lynda authors…that cover CINEMA 4D,…including Eran Stern...…

And Donovan Keith.…I also have my own blog called eyedesyn.com,…so it's E-Y-E-D-E-S-Y-N.com,…and if you go to my Tutorials page,…you'll see I have a whole bunch…of CINEMA 4D tutorials,…all for free for you to check out…whenever you have some free time.…And here's another site called…Greyscalegorilla.com that also has…a whole mess of CINEMA 4D tutorials,…and again, they're all free,…and he has over 300 tutorials.…Everyone knows Nick Campbell,…he runs this site, and he's just got…a plethora of motion graphics knowledge,…