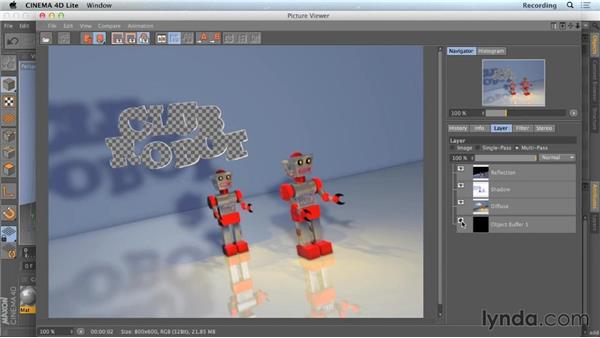 The multipass feature enables you to finely tune the look of your imagery or movie in post production in After Effects without rerendering the 3D. Just by adjusting each layer in post production multipass can also output a depth map that you can use in post for adding a depth field. And here you can see some of the passes that I've added to the scene. Here we have the diffuse pass. The shadow pass containing all the information about shadows. And here we have all our reflections.

And basically, what happens is, these can be combined together to create the full image. But they can be treated differently in After Effects. So, for example, I could reduce the amount of reflection just by bringing the opacity of the reflection pass down. Another useful feature of multipass is the ability to render object buffers and you can see I can actually create mats based on objects, using tags on the objects and specifying a number for each object to achieve it.

In the multipass render settings you can then output this unique alpha image for each object specified and it means its easy to isolate a particular object and pause production. If for example, you wanted to add a glow around a specific object, but needed the control and speed that you would get in After Effects, rather than adding the glow in Cinema 4D Lite. So, object buffers that I use to isolate individual images. You can even output a depth mat while will allow you to adjust the depth of field blur in After Effects.

So, let's start creating our multiple passes, and get working on some post-production.