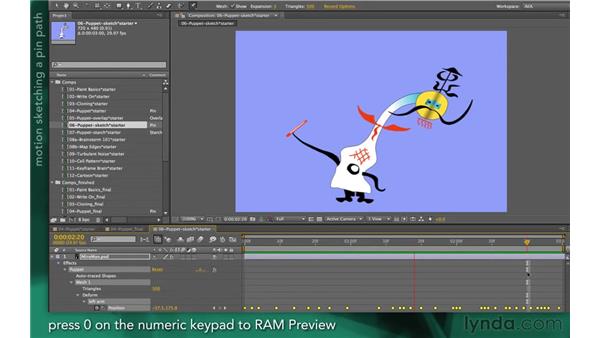 Next, let's try our hand at creating more organic movements for our Puppet…Pin animated character.…If you have access to the Exercise Files, go to the Comps folder and in this is…case open up the Comp 06-Puppet-sketch*starter.…This a little bit out of order compared to the After Effects Apprentice book,…but I figure as long as we are animating, let's keep the groove going.…Double click it to open it.…Make sure that Puppet Effect or Mesh 1 underneath Puppet are selected, so I can…see my user interface in the Comp panel and I've that pins on his-- I guess you…would call those his knees and his wrist where it connects to the pencil.…

You already know when you see this four- direction arrow on the cursor that you…can go ahead and drag and move it around.…If you were point later in time then when you originally created the pins, you…will get an additional animation keyframe.…But in this case, I am going to undo to get rid of that keyframe, move my…Current Time Indicator, back to the start of my composition, and explore using a…