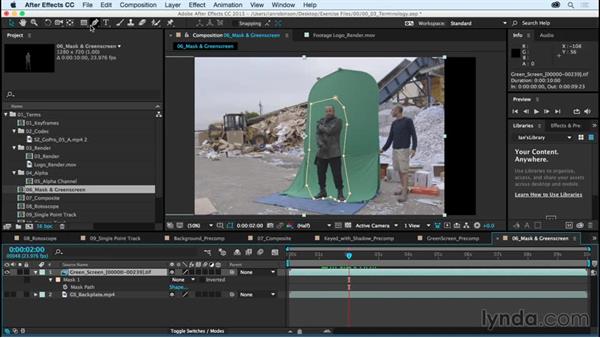 - Just so everyone is on the same page, in this video I am going to go over some common terms that are used throughout the video, visual effects and motion graphics industries. Now I know I haven't shown you anything inside of After Effects yet but I wanted to show you these terms within the context of an After Effects project. But this is only for reference so you won't find this project file in your exercise files. Let's get started. The first term I want you to be familiar with is called key frames. They record a specific paramater setting at a specific point in time.

Here on my timeline I have key frames that are recording things like the rotation of this logo. Another common term is called codec. It's primarily used to compress and decompress video files, like Windows Media or QuickTime files. With this file selected here, I can see I'm using an h.264 codec. Now another term you'll hear a lot is called render, and it's the process of actually taking your layered After Effects composition and creating an external file that can live on its own.

It's usually completely flattened and can move pretty much anywhere. Think of it like a YouTube video, Vimeo, a jpeg still image--any kind of file that you can just hold that's finished and basically no longer editable. Now the term alpha channel is kind of a fun one. An alpha channel is the fourth channel that actually makes up a video signal. So as I'm looking at this scene here, it's created by a red channel, a green channel, and a blue channel. But there's actually a fourth channel that determines transparency: the alpha channel.

Now if I just show you this one graphic, this lower third, notice how the video kinda pokes through underneath. These squares are semi-transparent. Well, if I look at the alpha channel, you'll see I actually have a black-and-white representation of transparency. So if it's really bright white, it's going to be opaque and then all the varying shades of gray will determine the level of transparency. That's the fourth channel, other than red, green and blue. Now the process of masking in green screen is kind of a fun one as well.

This is primarily used in visual effects. So here I'll just start from the very beginning. Notice we have a video file that has our character. If I scrub through you can see he's moving around in the scene but he's always in front of this green screen. Well I only want to isolate him, so the first thing I did is created a mask, and I used the pen tool to do that. If you're familiar with the pen tool from Photoshop, same exact thing. Now once I actually apply that mask it cuts out everything outside of the mask.

To add to the transparency, I wanted to actually use the process of green screening, where the software will analyze the background and take out any green pixels. So when I apply the green screen, you can see here that he is atually cut out of his background. And just to reinforce the alpha channel, if I click on here and view the alpha channel here's the black-and-white representation of what we're looking at. So the process of green screening gives you the ability to superimpose this person on any other background and usually, when you do that, that process is called creating a composite.

So if I look at my composite project here, you can see I've got kind of one of those teleporter effects, where my actor beams into the scene. This is why we didn't just shoot him in the background. I wanted to actually have the ability to create graphics all around him, and that was only made possible by doing that green screen process. Now another way to isolate elements off the background is rotoscoping. The term rotoscope means to go through frame by frame and cut out something from the background.

So here you can see my surfer has been rotoscoped out of the background. Here, I'll just move forward in the frame so you can see the full-screen video and I'm starting to actually add the graphic in here. So if I step through, you can see as the graphic is actually moving, he's rotoscoped out of the background and that gave me the ability to create this graphic style underneath. Now another term that you'll hear quite a lot is tracking, and there are two kinds that I want you to focus on: a single point track, and a camera track.

So with a single point track, the software can just look at a single point on the screen and follow that around the screen. So I used single point tracking to actually help the circles follow along as our surfer surfs through the scene. Another method of tracking is called the camera track. So here, in this scene, the software analyzes the footage and then recreates a software camera. So now, if I move through the scene, you can see I've placed this text in the scene as though it were actually there in the first place.

This was made possible by the process of using camera tracking. Now that was just a very brief overview of terms that you'll hear being used throughout this course. If you ever feel like you need a refresher, please feel free to come back and review this video again.