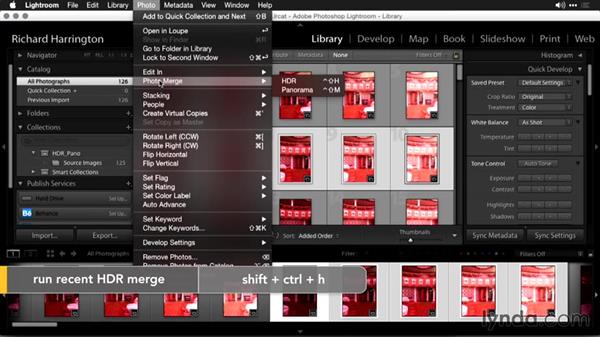 - Now that we've got all the images imported and organized by a collection, we can move on to the first step, which is merging the HDR photos. If you don't have HDR images, just skip this step, and go on to the developing. But let me show you how to actually get the merge done. To begin, I'll select five images. Then from within this collection here, I could choose Photo, Photo Merge, HDR. This brings up a new dialogue, and what we're going to do is Auto Align those and Auto Tone them. There should be no need for deghosting, because there's not any moving subjects in the scene here.

We don't have any clouds going by or blowing branches in the wind or people walking past. I was able to control the set. What's going to happen here is it's going to attempt to merge this and it will show me a preview image. Looks pretty solid. Looks like the alignment worked well, so I can click Merge and it will create that file. You can see that running up there, and it's processing the file, and when it's done it added it into the collection here. Well that's fine, but what I want to do is we're going to filter those off in just a second. Let's go ahead here and sort this by the order that they were added.

And you see it puts it at the bottom of the set. That'll make it a bit easier as we work. I'll select the next five images, but instead of having to see that dialogue, when I choose Photo Merge, if I hold down the shift key, it's going to bypass that dialogue. So now it's just shift control H to merge the HDR. So let's try that. There we go. It's merging with the previous set. Let's grab the next one. Select the range. Shift control H. Grab the next set.

And you see that each one is queued up. The way that these panoramics were shot, it was a right to left pan. Let's finish the merge, and when that's all done we can then move on to developing and then merging these into a single photo. In the upper left corner, you can see the operation status. HDR really came in handy here to show the full dynamic range of this mixed lighting scene. We had problems where there was dark shadows as well as bright windows, and by capturing five shots for each one of these brackets, we were able to show the complete subject matter.

Looks like we're going to have about 25 merged sets here when we're all done. That should cover the entire 360 degrees. You can see in the upper left corner the status, and if you have a multi-processor computer it's going to go through and start to build those out. Let's give it a chance to finish that out, and once it's finished building these images, we can move the merged files into their own collection, and then we'll start the process of actually invoking the photo merge to create a new image.