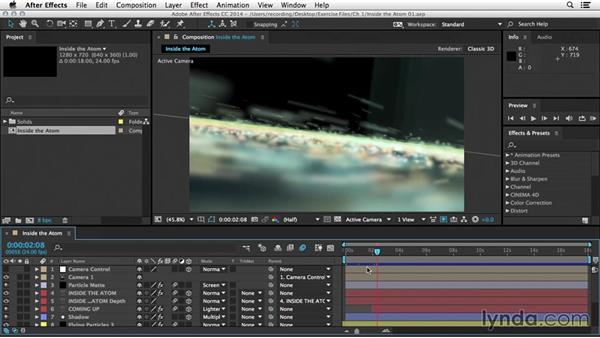 - The first chapter is about settings and definitions. By that I mean changing some preferences inside the software so you'll be able to get the most out of After Effects on your machine. For example, in this movie we'll explore the media and disk cache settings in the Preferences menu. Those settings are critical to get a fast response from the software. So it's important for you to understand how they work. I just want to mention that we'll keep return to different Preferences settings, modify and explain them as we are moving forward with this course.

So don't be alarmed if I'm not going to cover everything in this movie. Okay, let's get started. The first thing that I want to do is actually reset the software. And by that I mean actually delete the Preferences file. I'm doing it for two reasons. The first one is the obvious one. If the software starts to behave a little bit slower than expected or something just doesn't look right, this is the first thing that I'm usually going to do. The second is if you're following me, this means that we're going to be on the same page.

And I'm going to press Close. Now before I'm going to open a project and render some things for you, I just want to do some housekeeping. And this will help us to actually free up some valuable space and get ready to actually work with some more advance project. You probably know that After Effects is a 64 bit application. And 64 bit can address more space in your computer. So you can actually render much larger compositions both for preview and for final output with of course larger frame sizes and larger source files.

RAM previews can be much longer. And you can also work with higher color bit depth without encountering memory limitations. In order for After Effects to keep up with this high end requirement, it rely on a smart caching system which helps to speed up your interaction with the software as well as prevent it from recalculating identical frames. So it keep all of these expensive frame calculations data on your hard drive. This means that if you already unpreview something, After Effects will remember it, even if you close the project or even if you quit out of the software.

In order to demonstrate it, I'll open one of the recent project. This will be the first project from chapter one, Inside the Atom. And we see that we have a blue line here. Now, blue means that frames are cached and they are ready on disk. And green means that frames are cached into the RAM. But this means that if I'm going to press zero in order to see a RAM preview, After Effects doesn't really need to cache all these frames. It's actually going to copy them from the disk to the RAM in order for you to get a sense of what you have over here.

And we see that we have some kind of a composition name coming up Inside of the Atom. This is what the text means, of course. So if you have a faster disk, it means that your interaction with the software will be much quicker than usual. So in other words, if you want to speed up After Effects, make sure to attach a fast hard drive. And then you can go under the After Effects Preferences menu or in the PC side it's going to be under the Edit menu.

And then you can define how you can use this media and disk cache. For example, you can enable or disable it. Of course, you can set the size of the disk. So the larger disk that you have, the more frames you can calculate on it. And I'm just going to define in my case 60 gigabytes. The default is 46. And I have enough storage, enough space, on my SSD drive. It's also going to tell you that faster disk or solid state disk drive will improve your interactions.

If possible, just make sure to install a separate SSD drive, which is not the same one where you're saving your footage files. Now, here's just a couple of examples for frame sizes and memory requirements in megabytes, just so you know. So an SD file, let's say, NTSC file, 720x480 in 8-bpc, each frame will be 1.3 MB, the same for PAL, which is 720x576, is going to be 1.6.

Since we are dealing with some house cleaning here in the first movie, then I highly recommend that before starting a complex project you will also clean up the database and cache and also empty the disk cache so you will be starting from scratch. Now, know that if I'm going to click OK over here, it's actually going to clean everything except all of my current RAM preview. This will stay because I'm working with it. So After Effects is clever enough not to delete those frames.

But if you do want to start completely from scratch, and this is what I like you do to, then go to the Edit menu. And if you have anything open, just go to the Purge and Purge All Memory. This will assure that we are starting with a clean plate. Therefore, we don't have any frames saved on our disk and we can start. Now, an important note, just if you're working with couple of versions in the same machine, purging the disk cache for one version of After Effects doesn't purge the cache for other versions.

So in my case when I purge the disk cache for After Effects CC, anything that After Effects CS6 is using is not going to be affected. So this is how you delete the Preferences file in order to reset the software as well as change the media and disc cache settings in order to fit the needs of your computer, clean the cache, and prepare the software to work in its most efficient way.

1/8/2015
Get the most out of After Effects, with Eran Stern's After Effects Tips and Techniques. This installment is dedicated to rendering: increasing the quality and speed of your final export, as well as the RAM previews and prerenders you generate along the way. Eran shows how to optimize your system settings, addresses issues like flickering and upscaling, and introduces production-ready workflows that will increase your productivity and speed up interactions with complex projects.
Topics include: