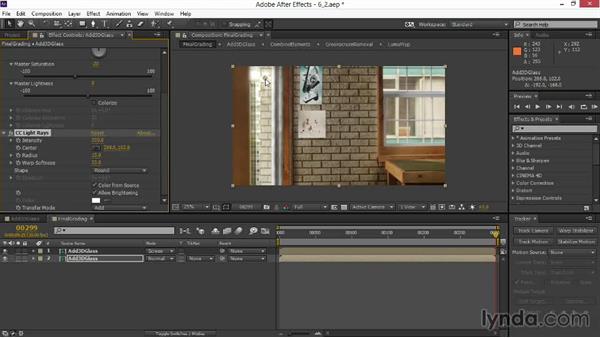 You've added a custom glow to all of these windows. You can add something similar in the form of a glint. A glint is a more specific highlight or hot spot. It might be a reflection off of a piece of glass. So,for example, we can add a glint on the window to the left. We use a hot spot that forms up here. Now, there's a great effect that can create that look and that's called CC light rays. So with this lower layer selected, I'll go up to Effect > Generate > CC Light Rays. It works by making the point underneath this center handle glow.

It's actually a copy of that same layer, it's been distorted and softened, and made more intense. So right away I can increase the intensity to make it more visible. I'll raise that to 300. You see it become brighter. Now, so it doesn't spread out too far, I'll reduce the radius to 15. Now in terms of the softness or hardness of the pattern that forms with that glint, I can adjust the warp softness. If I just interactively drag it, you can see different results. Here I'll set this to 35.

Now the brightness is based on what that center handle is over. So it move this over interactively just click-drag it over a brick to see how much brighter it becomes. So to start, I want to place it up here on the window itself over one of these top bricks. I'd say around three or four, 48. I can actually key that over time so that it looks like the glint is shifting. So I'm going to key that while I'm on the last frame. Now I'll move to an earlier frame, say 250, and update its center.

We're going to just click drag the handle and place it just outside the frame, where it should be over that window. You notice how the intensity change over time. So, maybe this is a glint that happens when the sun hits the glass just right. So, when I'm on the last frame, I can key that intensity at 300. But, when I'm on 250, I can reduce it down to zero so it fades in. So I expanded the CC Light Rays, they're underneath the layer, so I could see the key frames. So I'll go back to the previous key frame, and in terms of intensity, set that down to zero.

Let's play that back. So there you can see that glint shift and change intensity over time. Now you can continue to adjust in terms of making it more or less intense. You can experiment with different positions and even increase the radius, or experiment with the softness to get different results. In any case using cc light rays is a quick way to add a hot spot to your scene to create a glint.