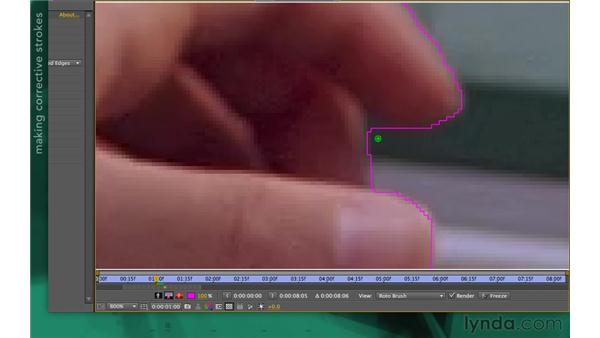 In the previous movie we tweaked Roto Brush's propagation parameters to help it find …the changes in the segmentation boundary from frame to frame.…This will greatly improve Roto Brush's performances and indeed is an essential step …that many people miss.…But, it does not make Roto Brush infallible;…you will still need to teach it when it makes mistakes.…To do this, you need to first start from your base frame and then step, …frame by frame, later and earlier in time and look for mistakes.…

When you make a corrective stroke, Roto Brush will propagate the new information…you've taught it from that frame in the direction that the arrows in the …Roto Brush Span are pointing.…Don't jump many frames down the road, make a correction then go back closer…to the base frame and go, "Oh, I'll look it missed something, let's make a correction here."…Roto Brush will not propagate your changes against the direction of the arrows.…It's very important to remember, these arrows make a big difference …in how the information you teach Roto Brush is used on subsequent frames.…