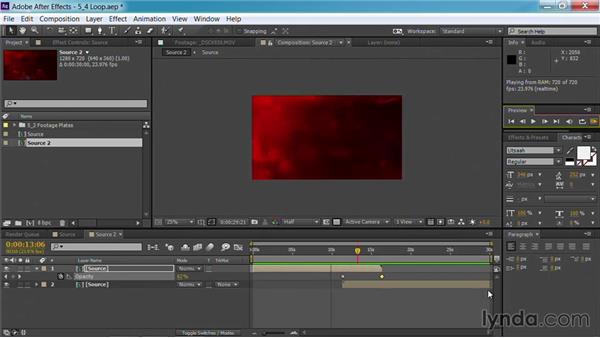 A loop is a loop is a loop. And the good news with a loop is that's seamless. With backgrounds, you don't want a distracting jump as the background repeats. But you may not want the over head of having to build out a four minute animation. If you create a loop that's ten, 15, maybe 30 seconds long, you can create a gentle pattern that, if needed, can be repeated. Maybe you only need ten seconds of it for the lower third and 15 seconds for the bump in. But when you decide to use that looping background for the closing credits that run for a full two minutes, well you've got what you need.

Let's explore a simple technique, building on the theme of if you can't solve it, dissolve it. With my layers built here, I'll pull out that stacked composition, and that's going to serve as the basis. Pressing the Return key, I'll call this Source. Now what I'd like to do is drop that into a new composition. So, I'll pull it in. You'll see now that I have a single footage layer. Essentially, we've nested the layers together, and this makes it easier to treat this as a single object. What I want to do is come somewhere in the middle and choose to split that layer, Edit > Split Layer.

Now, as you jump from this frame to this frame, it's seemless. However, we need to shorten this and create a bit of an overlap. So remember, all you need to do is select it in the middle, and choose Split Layer. Once that's done, shorten up your composition by a few seconds. Instead of 35 seconds, I'll drop this to 30 seconds. And now, it's pretty easy. Move this so it starts at the beginning. But rather than dragging, take advantage of useful keyboard shortcuts. You can press the Home key to go to the beginning.

And with that layer selected, left bracket will move the end point to the play out. Press the End key to go to the last frame of the composition. Select the bottom layer and press the right bracket to move the out point. If you don't want to do that with keyboard shortcuts, you can also just bring up the in and out point columns. And this'll make it pretty easy for you to see what's happening. For example, this composition is 29:23 long, and I move the out point to that position. However, I generally find that the keyboard shortcuts of left and right bracket work quite well.

Now, select the top layer here and press t for opacity. If you want to get to that manually you can of course twirl down the Transform Properties until you see it, but the keyboard shortcut for t, for opacity, goes a long way. Let's just create a gentle blend. I'll hide these columns to make a little more room. And I'll do a transition. Pressing i for in point takes me to the beginning of the bottom layer. That's the earliest I could start the fade. So up here I'll turn on the stopwatch, press o to go to the out point or just drag the playhead, whatever works for you, and change that to a zero value there for opacity, making it a zero opacity or 100% transparent.

Now we have a simple ramp. And in this case, it's going to blend between those two layers with a five second opacity fade. Let's RAM preview that entire composition. You see the frames become cached and loaded as indicated by the green bar. Once that's done, they'll begin to play back in real time. You'll notice here that the first frame and the last frame are going to be a clean loop, because this is where we split the layer. In the middle here is a slow opacity fade. And that opacity fade can hide the blending of the looped layer.

As it gets to the end, it's going to jump back to the beginning and repeat our seamless looping background There it is. And to finish this off, you could take advantage of any of the techniques you've already learned. Add a simple fill layer, Layer > New > Solid. And on that layer, you could generate a ramp. There's my gradient ramp. I could switch that to radial, dial it in as I see fit, swap those colors, and really set that to be the gradient that I want.

A simple multiply blending mode, the whites drop out, and I've got a nice dark edge. Anything else like textures or photographic sources can also be easily composited, but using techniques you've already learned for working with stills, it's very simple to create an attractive motion background. And if you don't like the colors that you've come up with, that's a piece of cake, too. Just explore some of the gradient map techniques we talked about before, and using an adjustment layer, add an effect like Colorama or the CC Toner effect, it will be simple for you to dial in colors.

So if your client is in more of a blue mode, just dial in the blue that they want. I can go with a rich blue for the shadows here. Set that in. Take my highlights down a little bit. And let's put this in a little darker. And then drop that into hue mode. And now I've got that rich, dark, bubbly, mysterious background for my underwater show about exploring the water. If they don't want to use the cool blue, maybe it's a show about lava. And the Colorama effect you learned about earlier has some great presets, not the default, but something like fire, and I'll put that in the stronger color mode, goes a long way.

And it's very easy for you to tweak things. If you're not getting the results you want, leave the gradient map where it is. But on an adjustment layer below, just put some sort of exposure adjustment. Using a Curves adjustment is one of my favorites, and it makes it very easy to pull the midtones around. Now you can change the intensity of that backdrop by making a simple Curves adjustment, and you see that the background takes on a whole new feel.

If you want to tweak the color, just go back to that Gradient Map, dial in a new pattern, and you've got new results, giving you a great set of tools to work with. Now I explored several techniques there, and depending upon your comfort of using after effects and some of these gradient tools, you might want to check that out again. For those of you who've watched this course from the beginning, you'll have noticed there that I built on several techniques that you've already seen. We took advantage of gradients and gradient maps and using layers and blending modes to really stylize the end result.

If you're just jumping in cold, you might want to check out the whole course. And if this technique really interests you, be sure to check out that detailed course all about shooting and combining footage plates. Here I'm using After Effects, but in that other Lynda.com course, I walk you through other techniques to use and tools like Final Cut Pro and Premier Pro

8/12/2014
Nearly every video project needs a background, whether it's an elaborate background for a chroma key set or simply a lower third. This course shows you how to create your own still and motion backgrounds using a few simple ingredients: the files that come with the course and from other sources on the web, and the built-in tools in Photoshop and After Effects. No special assets or plugins required! Rich Harrington introduces practical and easy-to-implement techniques that are suitable for video editors of all levels, and can be used to quickly add texture and style to your next project.
Topics include: